The Falcon and the Winter Soldier episode 5

Another incredibly hard-hitting episode. Sam’s saying “the legacy of that shield is complicated” sums it up about as well as it could ever be summed up I guess. That scene between Sam and Isaiah is probably one of the best-acted and most important ones the MCU has ever done.

Sort of jumping off that in a way, I’m geniunely kinda surprised the government in this show actually DID dismiss John Walker as Captain America because I have a depressing feeling they probably wouldn’t in real life. God knows you can probably find all sorts of modern-day examples of similar behavior that went unpunished, sigh.

Back to the MCU rather than reality:

I had no idea who that was Julia Louis-Dreyfus was playing but it turns out it’s someone from Latveria! Setting up for the Fantastic Four movie I guess? She was a big surprise.

It was nice to see Sarah again, also I realised recently that she shares that name with Steve’s long-dead mother, I wonder if Sam or Steve ever knew about that. (I am also a Sarah.)

I like that Wakanda had a new outfit created for Sam but oh man I can’t imagine how, after Bucky said “I need another favour,” the next words out of Ayo’s mouth weren’t something akin to “Oh fuck off Bucky.”

John Walker constantly screaming “I am Captain America!” sounded like a dark mirror of “I am Iron Man” in a way. Guess Walker is a dark mirror for a lot of people.

I really wish we’re gotten to know more about Lamar/Battlestar before he was killed off, I kinda want to hear his story and how he and Walker became so close.

Hm I think that’s all I’ve got coherent-thought wise, but this show has made me appreciate all over again how probably Sam’s biggest superpower is Being A Decent Person and man there really need to be more superheroes who have that as their power.

The Falcon and the Winter Soldier episode 1

This hasn’t grabbed me the same way Wandavision did but it’s pretty interesting so far. I do like that we’ve finally gotten to meet Sam’s family! Let’s get to the end without any of them dying please.

I also really like seeing some more aftermath and consequences of the Blip. (Am I the only one who still calls it “the Snap” in my head?) Really I suppose it’s surprising the world isn’t even more unstable than it is. Still weirded out even three years later that Spider-Man got to go back to school so quickly.

Seeing Sam kill people in exploding helicopters is weird and unsettling. I know he’s a soldier and thus it’s his job but… I dunno. The French guy in that sequence was Batroc the Leaper wasn’t he? One thing I do appreciate (sometimes) about the MCU is that they keep taking these absolutely ridiculous characters and making them translate to real-life settings.

It pains me that Sam now has no money, I suppose it makes sense what with him being dead for five years but still. It’s occured to me how many people would’ve had to be jerks for that to happen. Didn’t Tony leave any of his billions to the people he worked with? (Sigh, of course he didn’t. Sorry. I’m not much of an Iron Man fan these days.) But even aside from that, how on earth is there no money available for people who literally helped save the entire universe?

Go on the convention circuit maybe Sam? Charge people $100 for a selfie with you. That’ll make them change their tune.

Bucky’s friendship with that old guy was touching until I realised where it was going. Oh man. Maybe he should do the opposite and avoid the convention circuit.

I feel like this show is going to get political and that’s great! But after learning the actual US Army funds/oversees a lot of MCU stuff that sort of dampens it a bit. Well, a lot, a hell of a lot, if we’re being honest. Plus the world of the MCU right now is so far away from our one that I’m not sure they’re going to be able to make any I guess new points apart from in subtext? Does that make sense? We’ll see I guess.

Speaking of real-life stuff… sigh, I really feel like Chadwick Boseman’s T’Challa should have had a cameo in this, in an ideal world. 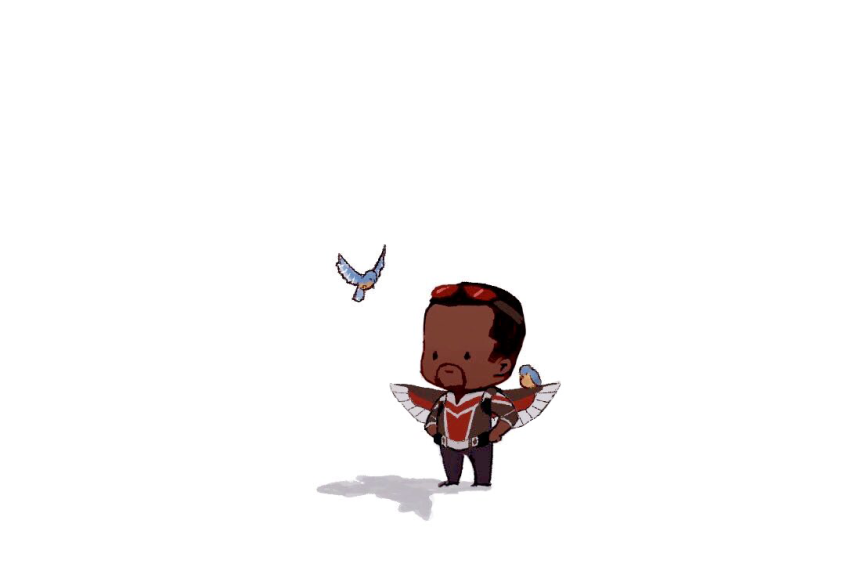 Falcon and the Winter Soldier trailer

Ooh this looks good! Relevant to all my interests. Erin Kellyman is in it, NICE, I had no idea. It looks really good.

But of course my first thought upon seeing this trailer was, “Aw, Sam and Bucky are in couples therapy.”

For the FIRST EVER! edition of Fourteen Favourite Shots I decided to do Avengers Endgame.

…which is in many ways a very ugly movie. I’M SORRY! But when I was screencapping it it felt like, so many scenes have this weird grey filter over them? Why?

However since I’m enhancing all the colours I suppose that doesn’t matter much.I still found it much harder than I expected to get a whole 14 shots I really loved though.

But! I do really love how the scenes on Vormir are lit. And that shot of Gamora on the top right is possibly my favourite shot of her ever – this tiny figure facing down the whole world.

I also totally love how there are two shots in here of a man staring at the woman he loves from the wrong side of a timeline.

Marvel Cinematic Universe expands back and forth at Super Bowl (videos)

Eeeek! Exciting stuff! I wonder what the brief flicker of Scarlet Witch’s comic book costume is all about.

Trailers for Black Widow and the new Disney+ Marvel shows were highlights of the trailers at this year’s Super Bowl.

At some point we all have to choose, notes Scarlet Johannsen’s Natasha in the Black Widow trailer.

And there’s the first proper glimpse of the Falcon and Bucky in action, a new take on the Scarlet Witch and Vision – and a vengeful Loki in the Disney+ trailer

Ooh this is great! I hope it becomes reality in the MCU soon.

On Your Left – The Importance of Falcon in the MCU

This post sums up the reasons that I, too, love Sam Wilson. I just have a real soft spot for characters who don’t have any superpowers but are heroes anyway.

With the recent news of Sony’s reclaiming Spider-Man I feel like anything I write on the subject of the Marvel Cinematic Universe right now will feel increasingly post-mortem, but there’s nothing wrong with the odd retrospective.

I don’t know why I found myself dwelling on the character of Sam Wilson, but his introduction in The Winter Soldier I found to be one of the most important moments in the MCU. The ninth film, six years after the advent of the series, and up until that moment we were missing several profound elements that Falcon brings to the table especially in his introductory scene.

So it’s been a few days now since Avengers: Endgame came out and I think I’m finally ready to put the Analysis Hat, and the Complaints Hat, and the Celebration Hat on. There were some things I loved and some things I loathed. Also since a lot of people haven’t seen it yet you have to click the ‘more’ button: