Babes, wake up. Neil’s being a good person again.

TERFS ARE SO *FUCKING* STUPID ISTG. SERIOUSLY. How could you read any of the discworld books- especially fifth elephant, monstrous regiment, equal rites, raising steam, unseen academicals, or even shepherd’s crown and think Pratchett would EVER agree with their bullshit ideology?

Some recent trailers for stuff

I am so darkly amused by the fact that none of the Stand trailers so far have mentioned that the story takes place after a deadly pandemic. Maybe they oughta just lean into it at this point.

The Queen but mostly Princess Diana! Honestly I always had a lot of sympathy for Princess Di. She was just a messed up kid thrown into the royal family and expected to fend for herself while everyone treated her like shit. (Wonder if they’ll mention the quite significant age difference between her and Charles :/ )

Okay The Watch doesn’t look terrible as a show (I guess) but it very obviously has NOTHING to do with the Discworld series it’s based on. So why even bother? Ugggh. Rhianna Pratchett’s thoughts are also mine.

Here I think of this Terry Pratchett passage:

“Do you understand what I’m saying?” shouted Moist. “You can’t just go around killing people!”

“Why Not? You Do.” The golem lowered his arm.

“I Worked It Out. You Have Killed Two Point Three Three Eight People,” said the golem calmly.

“I have never laid a finger on anyone in my life, Mr Pump. I may be–– all the things you know I am, but I am not a killer! I have never so much as drawn a sword!”

“No, You Have Not. But You Have Stolen, Embezzled, Defrauded And Swindled Without Discrimination, Mr Lipvig. You Have Ruined Businesses And Destroyed Jobs. When Banks Fail, It Is Seldom Bankers Who Starve. Your Actions Have Taken Money From Those Who Had Little Enough To Begin With. In A Myriad Small Ways You Have Hastened The Deaths Of Many. You Do Not Know Them. You Did Not See Them Bleed. But You Snatched Bread From Their Mouths And Tore Clothes From Their Backs. For Sport, Mr Lipvig. For Sport. For The Joy Of The Game.”

Come to think of it

I didn’t really need to write that long, gif-filled post defending comic book movies and the MCU. I mean, I’m not sorry I did or anything, but Terry Pratchett already said exactly what I wanted to say, better.

Here are my thoughts on comic book movies. 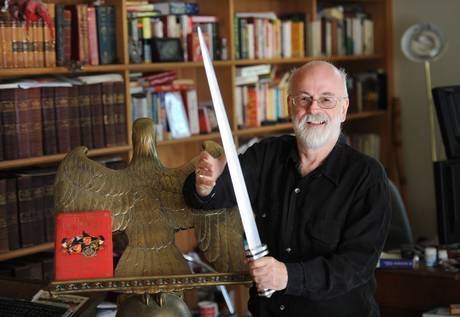 This is just a reminder that when Sir Terry Pratchett was knighted, he dug up his own iron ore, learned to smelt, smelted it, added meteorite iron, learned to forge, and forged himself a starmetal sword. As you do.

And then he put it away somewhere safe so he wouldn’t violate any UK knife laws.

The morality of fantasy and horror is, by and large, the strict morality of the fairy tale. The vampire is slain, the alien is blown out of the airlock, the Dark Lord is vanquished, and, perhaps at some loss, the good triumph – not because they are better armed but because Providence is on their side.
Why does the third of the three brothers, who shares his food with the old woman in the wood, go on to become king of the country? Why does Bond manage to disarm the nuclear bomb a few seconds before it goes off rather than, as it were, a few seconds afterwards? Because a universe where that did not happen would be a dark and hostile place. Let there be goblin hordes, let there be terrible environmental threats, let there be giant mutated slugs if you really must, but let there also be hope. It may be a grim, thin hope, an Arthurian sword at sunset, but let us know that we do not live in vain.