Here’s some of the photos I took this year. Most of them don’t really “mean anything” by which I mean, of course they mean something, to me anyway.

Pleasure Island at Cleethorpes has been closed since 2016, a fact that depresses me slightly since I loved it as a kid. So while in the area last week me and Dave stopped and took some pictures of its ruins.

Don’t worry, we didn’t actually go in! It’s covered in barbed wire, more bafflingly there’s a trench built all the way around it, and there’s a security dog too.

So we just got as close to the fence as possible and stuck the camera through increasingly tricky gaps.

Here’s the fairytale-like entrance to the park, not such a fairytale anymore.

Some castles left to rot behind barbed wire.

Who even smashed these windows?

The remains of one of the rides I remember best from Pleasure Island, the water side. It used to stand a bit taller.

A few misc buildings round the back, and a warning message.

RIP, Pleasure Island. Here it is in happier times.

Cleethorpes, UK. Not usually known for its beauty. — Stickety Sweeet

Cleethorpes, UK. Not usually known for its beauty. Touch here for the full post on the Quite Gorgeous Everythings tumblr — See these photos and more on eBay!

Cleethorpes, UK. Not usually known for its beauty. — Stickety Sweeet

Unexpected Cleethorpes on the dashboard!

Cleethorpes is far from beautiful, but I miss it terribly, especially now. I spent so much of my childhood running up and down its beaches… and of course my grandmother is still there. When all this is over I want to go visit her, but oh man, that “when.”

Well, I suppose there’s no point dwelling. Have a picture I found on Reddit that is also very much, ah, the Cleethorpes I remember.

Overly Devoted Archivist Uncategorized cleethorpes, history, I hope this is of interest!, me, spider-xan 3 Comments

@spider-xan (a fellow history lover) offered me the opportunity to do a total info-dump about WWII in Britain! (Well, the corner of Britain that my grandparents were in at the time). And I got EXCITED and here we are-

Okay so Grimsby and Cleethorpes were, from what I gather, really major targets during World War 2 owing to their position on the Humber estuary. But everything that happened there was censored from news reports, to stop information leaking out to the Nazis. Whenever a bombing raid happened, it was mentioned in newspapers only very briefly and without mentioning any names at all. (Just ‘a coastal town was attacked today’, that sort of thing) So when enemy airplanes came and unexpectedly dropped three thousand butterfly bombs, the first major ‘test’ of butterfly bombs in Britain, on Grimsby and Cleethorpes in mid-June 1943… it was from what I gather ABSOLUTELY HORRIBLE. Because no-one knew what they were, and they’d never seen them before, so kids would be out playing and pick them up and… yeah. It was worse than regular bombings because you knew when they were over, but the butterfly bombs could potentially get you at ANY TIME. Based on what I’ve heard from my grandmother, Cleethorpes (for that is where she is from) was very good at doing the whole keep-calm-and-carry-on thing, but it was still a really anxious, unpleasant time.

(Butterfly bombs were also notable in that they were basically designed to kill those who came to help the injured after a initial drop. Still the most profoundly depressing war tactic I can think of.)

There is one thing I came across which kinda highlights the attitude at the time, from here –

For weeks following the raid Grimsby suffered severe disruption, including the local bus service.  During the war it was the custom for some buses to be parked at night along Victoria Street and at the Cattle Market in Cromwell Road.  The idea being that if the bus depot were to receive a direct hit by a bomb, at least some buses would still be available for service.

There are DEADLY BOMBS literally just LYING ABOUT and plenty more falling from the SKY but we’re damn well KEEPING THE BUSES!

Anyway, the people of Grimsby and Cleethorpes were left with the nasty task of having to warn everyone about the dangerousness of butterfly bombs without letting on to the Nazis that their bombing campaign had been unsettlingly successful. So posters were set up around the towns, and – this is a horrible detail, but the gruesome-history-loving part of me suspects it’s true – some folks tasked with warning people set up a display involving the boot of a bomb victim, a boot that had a foot still in it. That would probably do the trick, yeah.

There were also videos like this released! And OH DEAR GOD I really shouldn’t laugh at it, I’m sure it wasn’t remotely funny to people at the time, but by our standards it sort of is…kinda funny.

So yes. It was an awful time for everyone, but news of the success never did leak and there was never another attack of that scale in Britain. I’m not sure how many people the butterfly bombs claimed in the two towns, but it was definitely around the two hundred mark I think. (That’s not counting all the people killed by other bombs, that number was much higher.)

Anyway my grandparents were right there during all of this and they survived which I am very grateful for! This is already WAY too long so I’ll just mention the stuff they did/told me about under the cut (along with pictures!)

Okay my grandfather was in a reserved occupation, which basically meant “you can serve the war effort better by staying where you are and continuing to do what you’re doing”. He was a metalworker, and I actually have a picture of him at work, given to me by my uncle-

So either he or my great-grandfather or both (I get very confused around here because they both had the same name and occupation) worked on the Haile Sand Fort, one of the Humber Forts. Here it is (it’s still there)-

And here is a video of some urban explorers checking it out. When I was a kid my grandmother was always full of stories about how dangerous the sea around the fort was, so, you know, maybe don’t try this at home.

My grandad helped fix minesweepers (the big ships which swept for mines) and apparently he was once on a boat attacked by Germans, except somehow he’d gotten there by accident, and I really wanna know the rest of that story I’ll have to ask around???! But he once again obviously survived. Man, do you ever kinda look at your family and go ‘….how in the hell did it turn out I was born?’ But I remain very grateful-

My grandad also kept trying to join the army despite being needed for the minesweeper work, which just goes to show that whenever Nazis spring up there will always be people who really want to fight them, long may that continue.

As you can imagine my grandparents basically spent much of their youths dodging bombs. Some snippets I’ve picked up over the years:

– Grandad was a Cool Guy With A Motorbike who also worked as a firewatcher in addition to the minesweeper stuff, and once jumped over a flaming gas main (and still remained alive! That’s three things which could have killed him by now!)

– My great-grandfather made chains for anti-submarine nets, which is apparently and unsurprisingly also a dangerous job

-At one point the Grimsby/Cleethorpes area just set up a bunch of fake tanks to fool any approaching enemies, and people were encouraged to hang around them and smoke so the Germans would see the pinpricks of fire and think the tanks were manned. Good tactic I guess, but terrible for lungs (I heard this one from my grandmother, I’ve never found the story online, but that’s not surprising I guess)

-The chances of a building being around from one day to the next were slim, my grandad’s house was bombed (he survived thanks to the Anderson shelter, that’s four times) and the shoe shop where my grandmother worked was completely obiltarated. They absolutely saw lots of friends and neighbours die, my grandmother once told me another story about a girl she knew who refused to leave the comfort of her bed for the discomfort of the Anderson shelter and had to be dragged out by her mother, that night a bomb hit the house and she would almost certainly have been killed. Which shows just how much a part of day-to-day life the bombs were, I guess.

And there you go! My family’s World War II story. (The other side of my family almost certainly also has an interesting story, but I dunno who to ask about that one.) Thanks for giving me the opportunity to talk about it. c:

Overly Devoted Archivist Uncategorized cleethorpes, I miss it :(, photography, that bottom picture is the first thing you see when pulling into the cleethorpes station 0 Comments

Overly Devoted Archivist Uncategorized cleethorpes, I really miss this town when I'm not there, photography 0 Comments 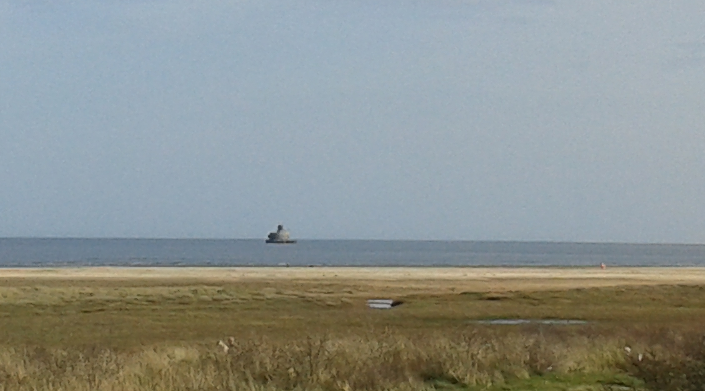 Welcome to the Haile Sand Fort. (It’s not small, it’s just far away!) This is where my great-grandfather Edward worked during World War II as a blacksmith building the submarine nets.

It was pretty dangerous work, since Cleethorpes was constantly being bombed by the Germans. My grandmother (the one who just turned 90!) told me that she worked in a shoe shop during the war, and she turned up for work one morning to find the whole thing gone, and other times she would emerge from the air raid shelter to find whole streets wiped out. Cleethorpes lost about 196 people in all to air raids, I think. Most of them to butterfly bombs.

What life was like out on the fort I don’t know, but I do know that people are strongly discouraged from trying to walk to it from Cleethorpes beach, even though my grandmother says she used to do it when she was a girl.