A little slice of wholesome to brighten your day.

By Amanda Jette on upworthy.com —

Society, pay attention. This is important.

My wife, Zoe, is transgender. She came out to us — the kids and me — last summer and then slowly spread her beautiful feminine wings with extended family, friends, and neighbors.

It’s been a slow, often challenging process of telling people something so personal and scary, but pretty much everyone has been amazing.

However, she dreaded coming out at the office.

She works at a large technology company, managing a team of software developers in a predominantly male office environment. She’s known many of her co-workers and employees for 15 or so years. They have called her “he” and “him” and “Mr.” for a very long time. How would they handle the change?

While we have laws in place in Ontario, Canada, to protect the rights of transgender employees, it does not shield them from awkwardness, quiet judgment, or loss of workplace friendships. Your workplace may not become outright hostile, but it can sometimes become a difficult place to go to every day because people only tolerate you rather than fully accept you.

But this transition needed to happen, and so Zoe carefully crafted a coming out email and sent it to everyone she works with.

The support was immediately apparent; she received about 75 incredibly kind responses from coworkers, both local and international.

She then took one week off, followed by a week where she worked solely from home. It was only last Monday when she finally went back to the office.

Despite knowing how nice her colleagues are and having read so many positive responses to her email, she was understandably still nervous.

Hell, I was nervous. I made her promise to text me 80 billion times with updates and was more than prepared to go down there with my advocacy pants on if I needed to (I might be a tad overprotective).

And that’s when her office pals decided to show the rest of us how to do it right.

She got in and found that a couple of them had decorated her cubicle to surprise her:

And made sure her new name was prominently displayed in a few locations:

They got her a beautiful lily with a “Welcome, Zoe!” card:

And this tearjerker quote was waiting for her on her desk:

To top it all off, a 10 a.m. “meeting” she was scheduled to attend was actually a coming out party to welcome her back to work as her true self — complete with coffee and cupcakes and handshakes and hugs.

NO, I’M NOT CRYING. YOU’RE CRYING.

I did go to my wife’s office that day. But instead of having my advocacy pants on, I had my hugging arms ready and some mascara in my purse in case I cried it off while thanking everyone.

I wish we lived in a world where it was no big deal to come out.

So when I see good stuff happening — especially when it takes place right on our doorstep — I’m going to share it far and wide. Let’s normalize this stuff. Let’s make celebrating diversity our everyday thing rather than hating or fearing it.

Chill out, haters. Take a load off with us.

It’s a lot of energy to judge people, you know. It’s way more fun to celebrate and support them for who they are.

Besides, we have cupcakes.

Thank you. I needed this story today.

What a lovely story.

First happy tears of the day. Read it, let it soothe a little of the ugliness of today’s news.

Just a few of the stories:

14. Leprosy is now easily treatable. The number of worldwide cases has dropped by 97% since 1985, and a new plan has set 2020 as the target for the end of the disease. New York Times

28. Cameroon committed to restoring over 12 million hectares of forest in the Congo Basin, and Brazil started a project to plan 73 million trees, the largest tropical reforestation project in history. Fast Co.

30. In 2017, the ozone hole shrunk to its smallest size since 1988, the year Bobby McFerrin topped the charts with ‘Don’t Worry Be Happy.’ CNET

39. In October, a new report by the International Labour Organisation revealed that global child labour has plummeted. In 2016, there were 98 million fewer boys and girls being exploited than in 2000. CS Monitor

45. Norway’s sovereign wealth fund, the largest pile of money on the planet, announced they were officially divesting from all fossil fuels, and the global insurance industry has pulled $20 billion. Telegraph

46. In 2017, the United Kingdom, France and Finland all agreed to ban the sale of any new petrol and diesel cars and vans by 2040.

48. In one of the great climate change victories of our time, TransCanada terminated its tar sands pipeline, triggering a $1 billion loss and ending an epic 4 year battle between politicians, big oil, environmentalists and indigenous communities. Calgary Herald

50. In the United Kingdom, the birthplace of the industrial revolution, carbon emissions fell to the lowest levels since 1894, and on the 21st of April the country did not burn coal for the first time in 140 years. Independent UK

69. As plunging crime closed prisons across the Netherlands, the government started turning them into housing and cultural hubs for ten of thousands of refugees instead. Fast Company

81. Rates of violent crime and property crime have dropped by around 50% in the United States since 1990, yet a majority of people still believe it’s gotten worse. Pew Research

91. A decrease in pollution in the Ganges brought Gangetic dolphins, one of the four freshwater dolphin species in the world, back from the brink of extinction. Hindustan Times what a nice dad!

This is so cute omg

I hung a sign on my door tonight reading

I have the flu! I don’t want to infect any little monsters! So please help yourself!

with an arrow pointing to the candy bucket next to the door.

So far three separate small children have yelled PLEASE FEEL BETTER at me through my door. Also one of them told what was clearly his younger brother “Take ONLY ONE, don’t be greedy, the Great Pumpkin can see you.”

Faith in the world: restored.

When I loaded up the bucket it had in it:

I just brought the bucket in and it had in it:

Apparently someone thought that I might like a blow pop and a Twix bar. Thank you, trick-or-treating child, I DID. 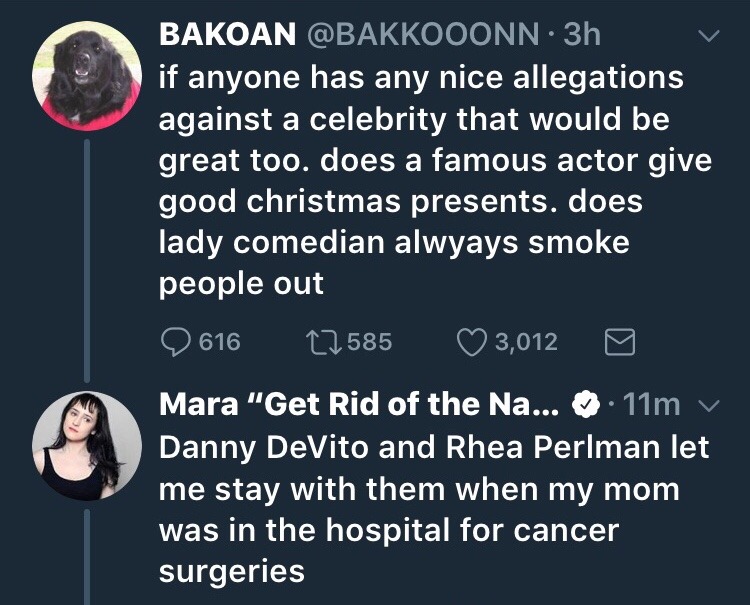 Wait weren’t they her shitty parents in Matilda?

Yep! It was right after filming it, actually.

What’s even better is that Maras mother LOVED the book Matilda. She loved it so much that she got her daughter the part, however she died before she got to see it. Or so Mara thought. Apparently just a few weeks before she died Danny Devito went in to the hospital with a rough first edit of the movie and got to let her watch it before she passed. 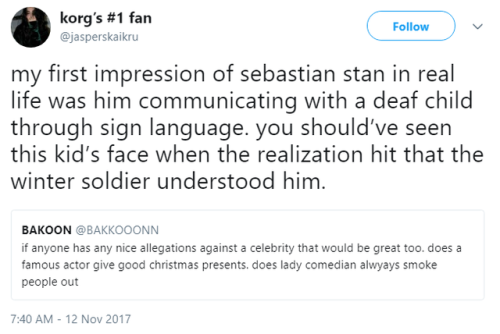 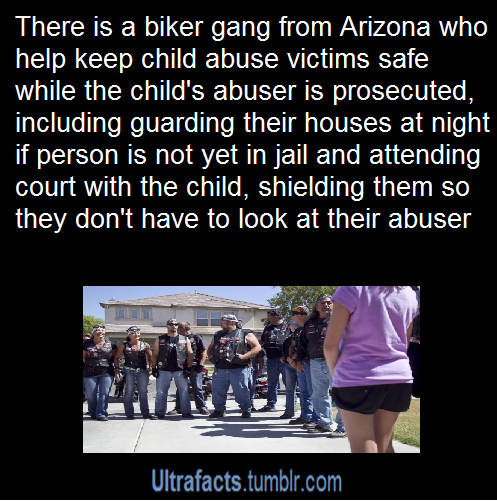 These dudes are fucking legit.  They don’t just show up one day in court, either, they actually make friends with the kids and let them know they have a support system and that there are people in the world who care about them and will always have their back.  And less important, but also cool, is that the few times a couple of them have come into my cafe, they’ve been super friendly and polite and when I told one of the guys that I noticed his Bikers Against Child Abuse patch and wanted him to know how awesome I thought he was because of it, he got kind of shy and blushed and said, “The kids are the awesome ones, we just let them know they’re allowed to be brave.”

The source is long, but so, so good. These men and women are available in 36 states, 24 hours a day to stand guard at home, in court, at school, even if the child has a nightmare. Many of them are survivors of childhood abuse as well, and know what it’s like to feel scared and alone.

In court that day, the judge asked the boy, “Are you afraid?” No, the boy said.

Pipes says the judge seemed surprised, and asked, “Why not?”

The boy glanced at Pipes and the other bikers sitting in the front row, two more standing on each side of the courtroom door, and told the judge, “Because my friends are scarier than he is.”

Show me more of people like this, world. I give up on humans too easily.

where do i sign up for this,i want to be in this gang

This is fucking amazing. It may be out of character for me to say this but rock on

Bikers Against Child Abuse was founded in 1995 by a Native American child psychologist whose ride name is Chief, when he came across a young boy who had been subjected to extreme abuse and was too afraid to leave his house. He called the boy to reach out to him, but the only thing that seemed to interest the child was Chief’s bike. Soon, some 20 bikers went to the boy’s neighborhood and were able to draw him out of his house for the first time in weeks.

Chief’s thesis was that a child who has been abused by an adult can benefit psychologically from the presence of even more intimidating adults that they know are on their side. “When we tell a child they don’t have to be afraid, they believe us,” Arizona biker Pipes told azcentral.com. “When we tell them we will be there for them, they believe us.”
( Article)

More about BACA, from their site

They go on runs to protect the child if they feel even the slightest threatened no matter where. If the child needs them to go on vacation with them, they do. Bikers come from across the nation to watch over and take shifts for these kids. And the best part is once you’re adopted into this family as a BACA kid, you’re always one. Even when you’re 40 and the perp gets released from jail, they’ll come meet with you and find your best options for avoiding the person and maintaining the life you’ve built for yourself. Once a BACA child, always a BACA child. In Florida, there’s 100% rate for identifying the perp based on the child’s testimony. Why? Because BACA stands with the child and supports the child so they feel comfortable enough to point out their attacker.

What’s better than a badass biker gang being on your side???

NATIVE AMERICAN CHILD PSYCHOLOGIST WHO IS A BIKER AND NAMED HIMSELF CHIEF HELL YES I’M HERE FOR THAT AND BIKERS BEING BAD ASS TO PROTECT KIDS. HELL YEAH.

it’s back! I will always reblog BACA

I know they wouldn’t consider themselves such, but these people are freaking heroes and the world is a better place because of them.

Hey folks, it talks about this in the article but its not mentioned in this post, BACA is a 501 © (3) charity that depends in part on donations to help pay for stuff like gas for their bikes. If you want to help, consider donating.

I love these folks! I’ve reblogged them before but it’s wonderful to see the donation information has been added.