As the raging California wildfires encroached upon Roland Handel’s home, he had to make a split-second decision — try to force his dog Odin into the car, or leave him behind.

Odin is one of two great Pyrenees who take turns guarding the family’s eight goats from coyotes and mountain lions, and he was on duty the night the fires broke out.

So he opened the gates so the animals could flee, then drove off with his daughter, their three other dogs and two cats all packed into the family car.

“By the time we were going down the road, you could hear the twisting metal of transmission towers falling and propane tanks exploding,” he said. “I’ll never forget it.”

He returned the next day, circumventing roadblocks to get there.

He discovered that his home and everything else on his property was completely destroyed.

Except for Odin, who was there waiting for him — with all eight goats.

The dogs paw pads were burnt and his bright white fur was singed orange.

“He looked small and he was limping. He was lying down a lot. He was clearly exhausted.”

A group of deer had gathered with Odin and the goats, Handel said, perhaps also taking advantage of the brave pooch’s protection. The deer scattered when Handel approached.

He believes the dog led the other animals to a clearing at the center of a high outcropping of rocks to avoid contact with the flames.

“Its amazing he’s in such good spirits. He doesn’t show signs of being traumatized at all. He’s just really happy,” Handel said.

“He’ll make a full recovery. He’s going to be back with his goats.”

Handel is now raising money on YouCaring to rebuild the animals’ barn and water supply before winter.

Carlos Vasquez owns First Professional Cleaners, a business that has helped thousands of people with one small act of kindness: free dry cleaning.

For the full touching story including the donations that flooded in to help pay for this free dry cleaning service go here.

DC Child Who Mixed Up Petco and Pepco Gets Hamster Anyway

DC Child Who Mixed Up Petco and Pepco Gets Hamster Anyway

Once Teased For Her Love Of Bugs, 8-Year-Old Co-Authors Scientific Paper

Once Teased For Her Love Of Bugs, 8-Year-Old Co-Authors Scientific Paper

I am SO happy

So about 4 days ago my brother was working in the yard and he was getting rid of this big old plastic pot we had that was already falling apart. To fit it in the garbage bag he had to smash it into smaller pieces with a shovel.

But when he dumped out the dirt….

My mom brought them in to show me. Not knowing what they were or if they were dangerous or not, she asked me if I wanted to take one and open it up outside to make sure it wasn’t full of baby bugs or something. I told her that they were definitely reptile eggs but she was still giving them the ‘I-still-don’t-trust-that-they-aren’t-bugs’ look.

I knew there was no way it was full of bugs and I wouldn’t be able to get it off my mind if we cut one out and killed it. But then I remembered candling.

If you don’t know what candling is, it’s when you put a flashlight under an egg to check if it’s fertile or not.

So I told her to hold on and I ran to get a flashlight.

Lo and behold they were not bugs.

It was our first time ever candling anything so we weren’t exactly sure what to look for. The only videos I had ever seen for candling an egg was a video talking about how some geckos lay eggs without a mate but there is a rare chance they could be fertile anyway; the eggs in the video were always empty though. So we checked all the eggs and they were all alive and responsive. I managed to convince my family that I was 99% sure they were lizards of some kind.

Since we kind of accidentally destroyed their nest and a storm was coming we set out to give them somewhere safe to hatch.

We got a pot and filled it with damp dirt like the one we found them in but smaller. After candling each egg, we made a divot in the dirt and placed each egg half in and half off, careful not to turn them too much and damage them.

My mom did some research and found that the eggs needed to be kept somewhere with good humidity so we got a plastic book crate, drilled some holes in it, and filled the bottom with wet paper towels.

The mystery eggs were put in the garage where it was just as hot as outside but safe from the huge thunderstorm.

Day 2 of eggs and nothing happened. We didn’t think anything would happen just yet but we were all a little worried that we were doing the wrong thing. It was my day to go finish up cleaning up the dirt and shards from the broken pot in the yard when I found another egg.

I picked it up and it wasn’t as firm as the others. In fact it was leaking. I called my mom and candled the little guy. He was just as alive as the others were. There wasn’t much room in the new incubator with the other eggs so we got a tiny beta fish tank we haven’t used in years and fixed it up for the egg. We put it in the garage next to the others.

Now this egg had me worried. He had been out in the storm with a damaged egg. I would go out and check on him throughout the day. Not a thing happened and I was starting to worry that he didn’t make it.

Day 3 of eggs was interesting. I went out to check again on little egg 11 with my mom. She asked how the others were doing and wanted to see. It was fogged up on the inside so I shone a light through and saw it. A head! A little baby lizard head poking out of the egg!

All together 4 little lizards were hatching. They’d kick for a bit in their eggs but then fall asleep because it was so tiring.

After a while my mom got concerned about one that hadn’t opened its eyes in ages. It wasn’t moving. I picked up the egg and put it in my hand. I rubbed the shell and gently gave it little tugs. Then out the baby came!

This little guy came out healthy and fast. After a brief look-around he ran out of my hand and back into the pot. Then over the edge of the pot to explore the hides we fit in.

After 4 of the babies fully hatched and we figured out what we were going to do, we put the incubators in the spare tank we had so we could keep an eye on them. At that point it was a little past 1:00am and a 5th egg started to hatch.

Day 4 of eggs and lizards we went to the local pet store to get something that these super small babies could eat. Luckily, Petco carries super small crickets and meal worms. We loaded up on reptile supplies: bus, vitamin dust, hides, heat lamps, you name it we probably bought it.

Upon getting home my mother and I readied the tank.

At that point all but two eggs had hatched. One we thought wasn’t going to make it because it didn’t react when I candled it, and the other was number 11 who was found a day late and broken. We decided to move the two into one incubator instead of two while we moved 9 of the lizards into their temporary home.

When we look for them they were hiding in the incubator all curled up together under a plant we had put in. They actually seem to do that everywhere they decide to hide which is kind of surprising to me. I thought they were going to all be really territorial with each other. But they seem to like each other more than I thought they would.

After a few hours, number 11 hatched and he was just as healthy and fast as the others despite being through the storm earlier. Not too long after that, the last egg hatched. He was much smaller than the others but equally as fast. We added them both to the tank with the others and they hid as quick as a ninja.

Day 5 of lizards was mostly setting up heat lamps and lights and worrying if they were okay. They stayed hidden under rocks and brush. We never saw them eat so we went back to researching.

Day 6 of lizards and they are alive and well! They’ve taken a liking to the new heat lamp and have been scuttling around there all day. I even saw one eat a cricket!

Even the smallest of the bunch was enjoying himself in the warmth :)

I will continue to take care of them until it comes time to release them back to their natural habitat. I’ll keep you all updated. It’s such a strange and wonderful learning experience :)

Just introduced a kid to her adoptive parents. They brought her a dozen roses. We met at a restaurant. I arrived early to get a private booth and told the waitstaff what was up. So all the servers were having a cry in the corner. I’m at a coffee shop a few miles away, giving them space and having my own cry.

Adoptive mom clarified to me later: roses were pink because pink means forever.

What’s more important than the roses, though, is they also brought her a luggage set so she wouldn’t be moving her things in garbage bags. The luggage matches theirs, cause it’s family luggage for family trips.

And now the rest of us are crying too 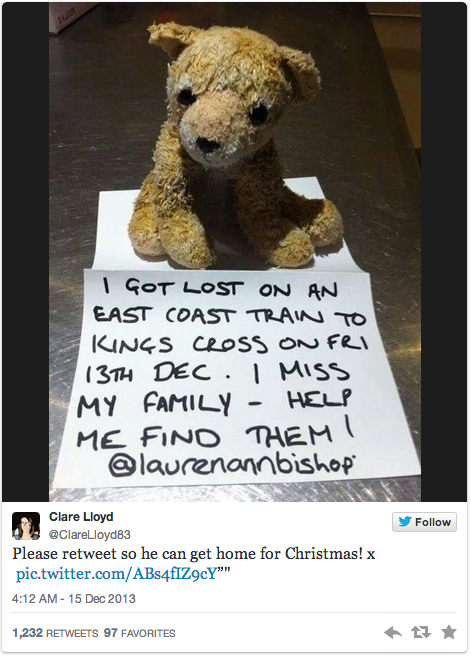 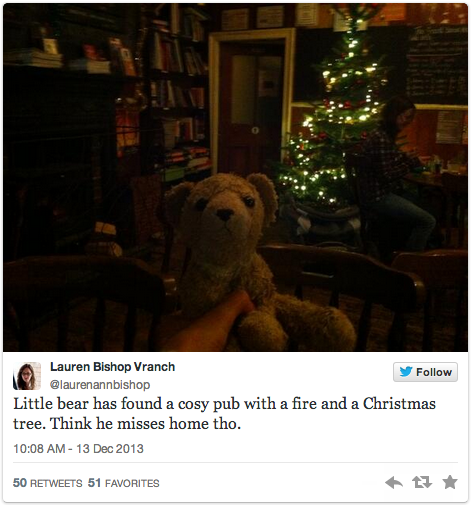 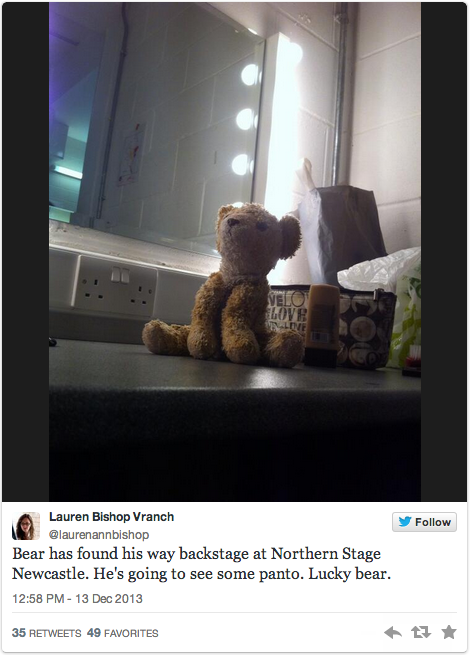 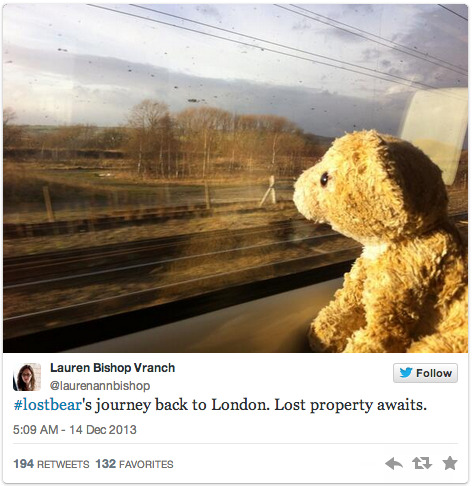 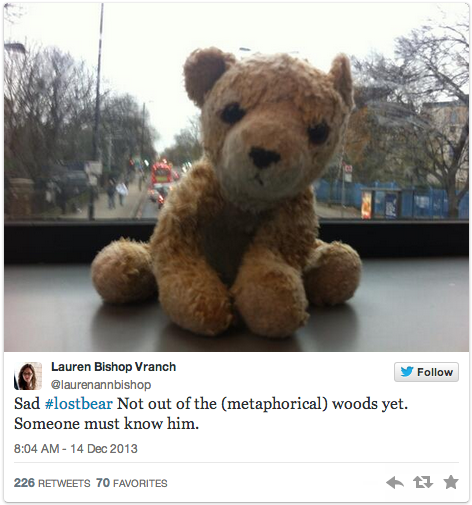 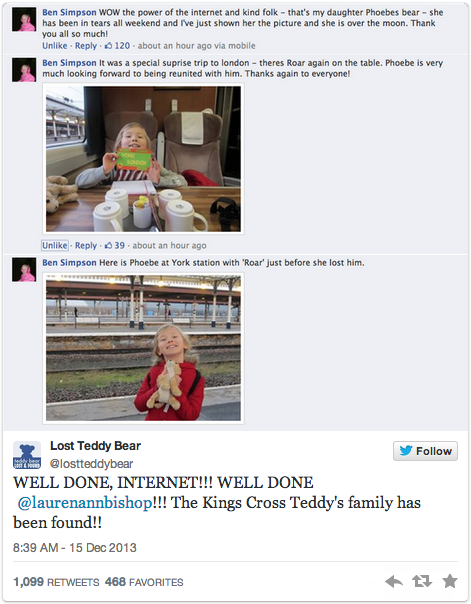 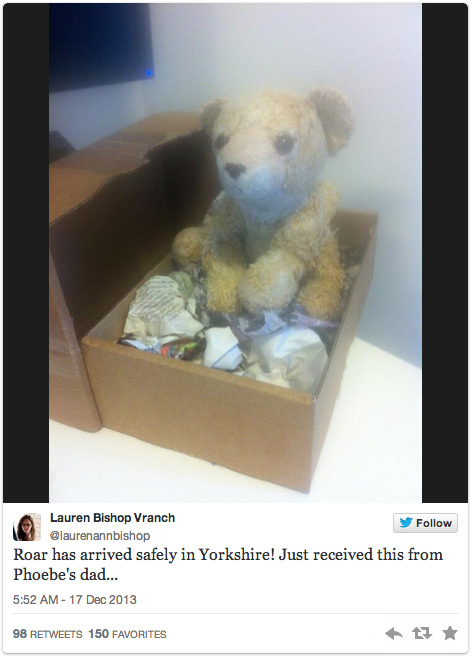 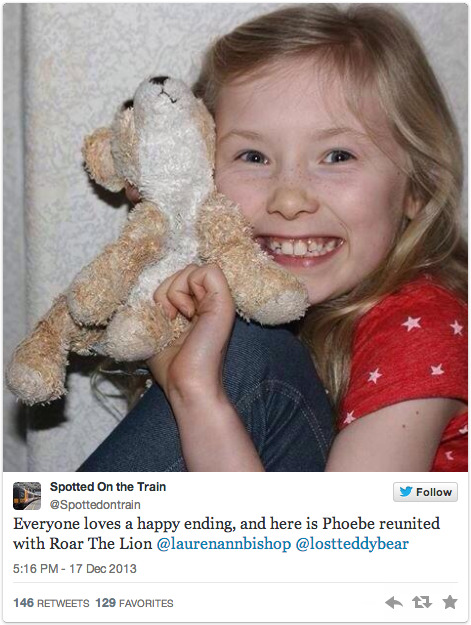 This is (one reason) why I love the internet.

I AM SO HAPPY THAT ROAR THE LION BEAR FOUND HIS WAY HOME :)

This is the cutest thing!  i’mm reblog it again!

For all the crap that happens on the net, with something like this, you’re glad it was discovered. 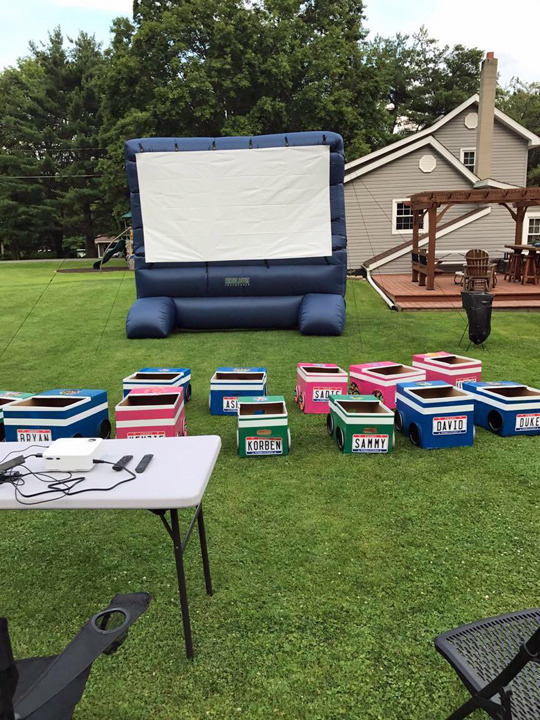 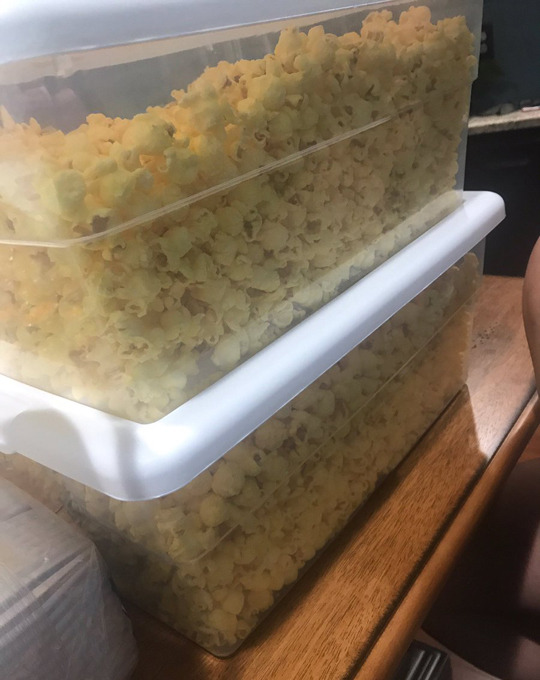 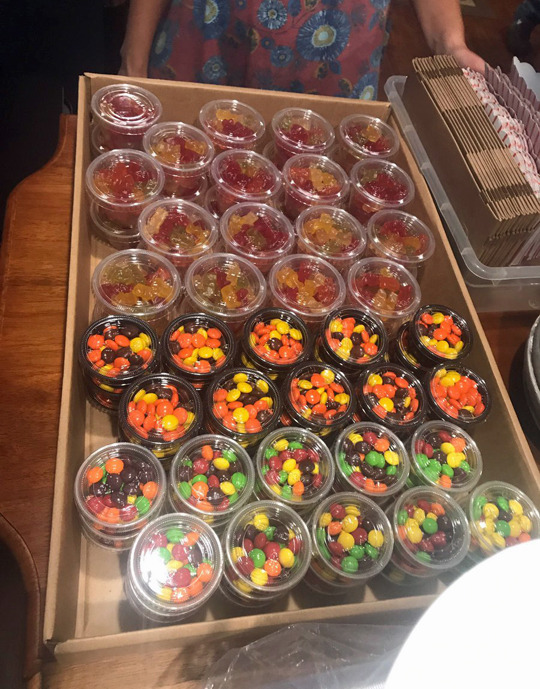 This is so cute

My family did this but for us adults lol

I’m doing this as an adult 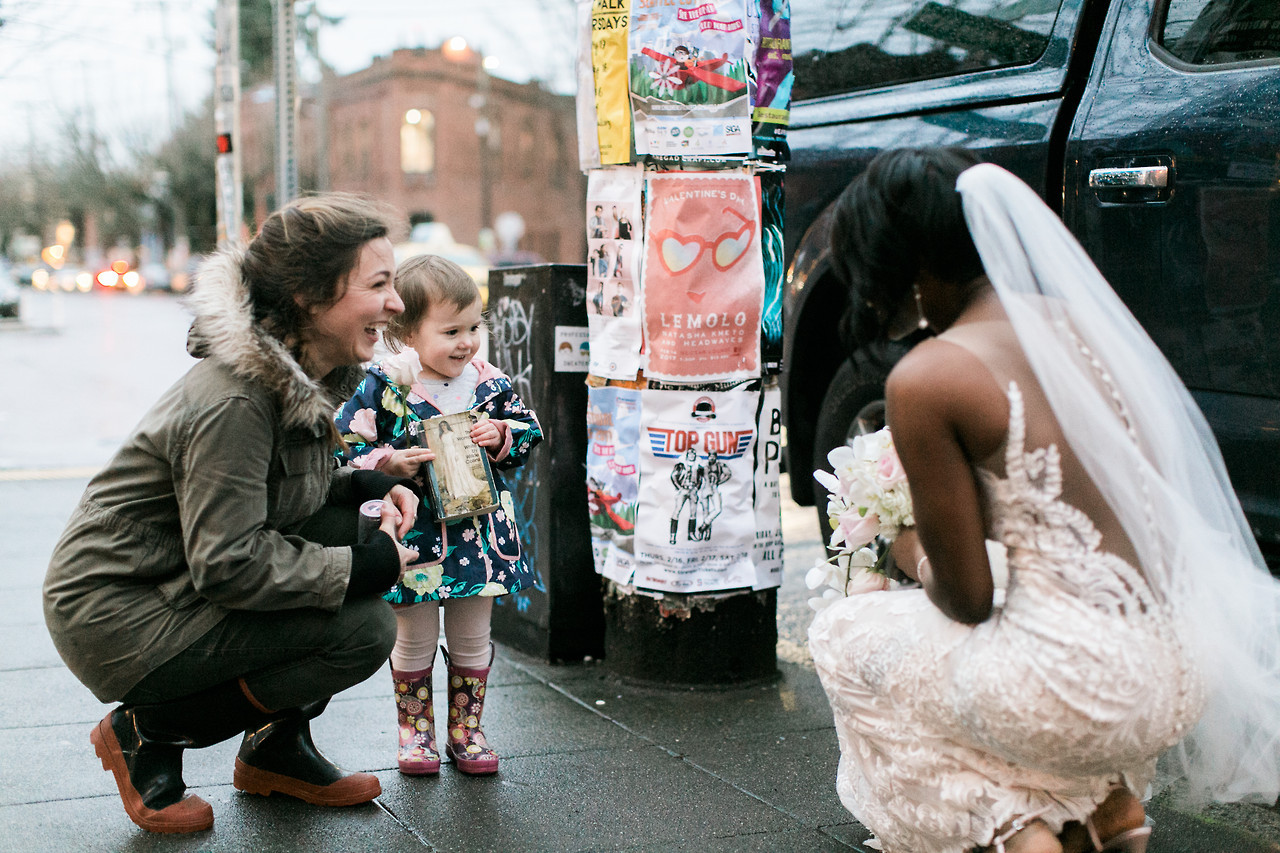 Little girl thinks bride is the Princess from her favourite book (Source: http://ift.tt/2s0fF7z)