I decided to post this Star Wars fanfic-like thingy on Reddit. It didn’t go down well (sigh) but I did explain in the comments why I had Finn and the others face those particular obstacles. So I thought I’d write that explanation here as well:

Here is my thinking: I want Finn and Rey to do more to fix the mistakes of the generations that came before them. They don’t really get that in the movies, even though the whole original Star Wars trilogy is about redeeming the past.

So in this scenario Rey represents Anakin. She’s hotheaded and she’s blinded to the long-term consequences of her actions. But instead of giving in to the dark side because of the desire to keep a loved one alive, she respects the wishes of her loved one while Anakin did not.

Finn represents Padme. He understands what evil is and has a strong sense of justice. Rey turning to the dark side would be a path he could not follow. So he refuses to let her do it, even if it means his own death. We already know he’s a self-sacrificing person (see: the Battle of Crait) and here he gets the agency in death (or not death as it turns out) that Padme did not.

Kylo/Ben represents… well, himself, but also Vader in a sense. But here he’s posed with a choice different to the one Darth Vader had all those years ago. It’s easy to save your own child. It’s less easy to save a person who hates you, who the woman you love would chose over you in a heartbeat. Saving one person isn’t necessarily a redemption, I never thought it was with Darth Vader either. But I think that for Kylo, saving Finn would be more of a redemption than saving Rey was. There is after all absolutely nothing in it for him.

I left it open as to whether Finn is Force-sensitive or not because I feel like it doesn’t matter. It doesn’t matter if you’re a Jedi but it does matter if you’re a good person, and that’s the other thing Finn represents here. That’s the most important thing he represents here – it’s not your lineage that makes you important, or your Force sensitivity, it’s whether or not you’re willing to be heroic.

And to me that was always one of the biggest things of Star Wars, and I feel like the sequel trilogy dropped the ball there a bit. That’s also why Han is there at the end. It always really bugged me, the idea that non-Force users would never become ghosts, might not even have the same afterlife as their Force-using loved ones even.

(I have absolutely no idea if this was covered in the wider Star Wars universe. I pretty much just stick to the movies.)

Now the galaxy is saved and if a new Jedi order does go forward it will be a very different one. Why? Because an ex-stormtrooper decided to stand up and fight even though he had almost no chance of survival.

And that’s what I wanted to happen with Finn.

So after the John Boyega interview where he rightly complained about Finn being sidelined, I wondered, there must have been a way to write him into the Rise of Skywalker finale and de-sideline him, surely?

So what I would have done is this:

Finn goes with Rey to Exegol. (From here on, Finn’s original role in the movie is taken by Rose.) He has a lightsaber with him, Luke’s lightsaber, which counts as his now. Rey has Leia’s. He’s completely untrained but willing to fight to defend the galaxy anyway. Even if he’s not necessarily Force-sensitive, he’s still willing.

There, Palpatine immediately captures Finn, realising right away that he must mean something to his granddaughter. He torments Rey by telling her this wouldn’t be the first time he’d turned someone into a Sith by using their love for another.

Palpatine shocks Finn once with Force lightening and this is enough to make Rey crumble. She tells Palpatine that he can do whatever he wants, just spare Finn. There you go, almost the exact same way Anakin fell…

…except Finn isn’t having it. From behind whatever Force-field Palpatine has him in he tells Rey that he would rather die than see her become a Sith and the galaxy in darkness. He tells her he’s spent all his life trying to find agency and he’s damn well not about to let it go now, even in the face of death. Hey turns out Rey and Finn were the Anakin and Padme of their generation, not the Han and Leia, except they’re not about to make the same mistakes.

Palpatine just laughs evilly at this, as he usually does, and is about to deliver the killing blow to Finn but THEN Ben Solo enters the picture! He strikes Palpatine from behind, causing enough damage to free Finn from his clutches. Now the game has changed! Rey, Finn and Ben go 3-1 against Palpatine (albeit probably with some confusion on Finn’s part as to why Kylo Ren is there.) They’re doing pretty well for the first few minutes! Then Palpatine aims some lightening at Rey. Finn somehow deflects it away from her but instead it hits him full-on.

Rey thinks he’s dead and is horrified and grief-stricken, but she can hear the voice of Anakin Skywalker in her head telling her not to give into her rage. She listens, and Ben can not only feel her emotions but suddenly hear the voice of his grandfather as well. This distracts him so much Palpatine is able to shove him into the pit and remove him from the fight.

NOW Rey, all alone and thinking her true love (Finn, not Ben) is dead, finds herself able to do what it took Anakin a lifetime to understand. With all the ghosts of all the Jedi working through her, she calls on the Light Side and defeats Palpatine once and for all. Only then does she run to Finn and allow her emotions to take over. He definitely appears to be dead and she sobs while holding him.

Then Ben comes climbing up out of the pit. He looks at the scene before him and realises what he has to do. Without a single word said, he kneels down and he Force-heals Finn. Rey watches in bewilderment. Finn sits up with a gasp, instantly falling into Rey’s arms. Rey exchanges a look of intense gratitude with Ben and then realises he’s given all of his lifeforce over to Finn. He’s dying. She takes his hand, but does not kiss him, as he dies and disappears.

At the end of the movie both Rey and Finn (and BB8) return to Tatooine. Finn wonders how he was able to deflect the lightening away from Rey back on Exegol, and Rey ponders that maybe it’s a person’s willingness to sacrifice, rather than any training or even any Force sensitivity, that makes them a true Jedi. She names herself “Skywalker” and Finn says he would like that name as well, which sounds an awful lot like a proposal.

The sun sets as Luke, Leia AND HAN watch the new generation from the afterlife. All is finally well in the galaxy.

I LOVED this callback. 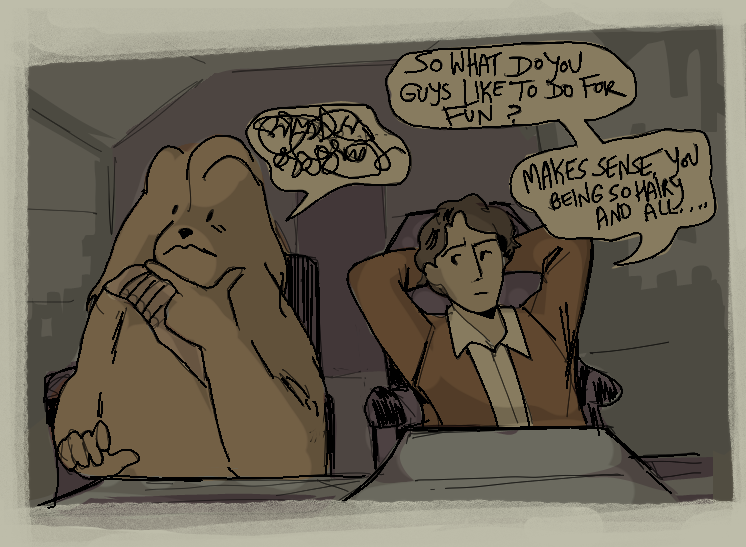 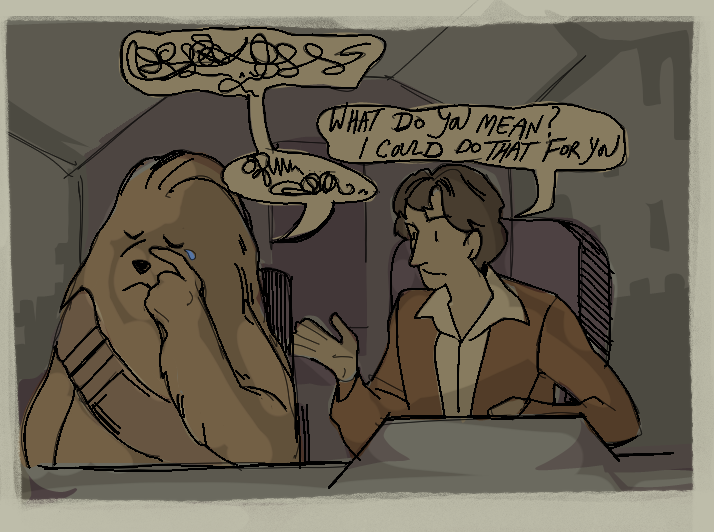 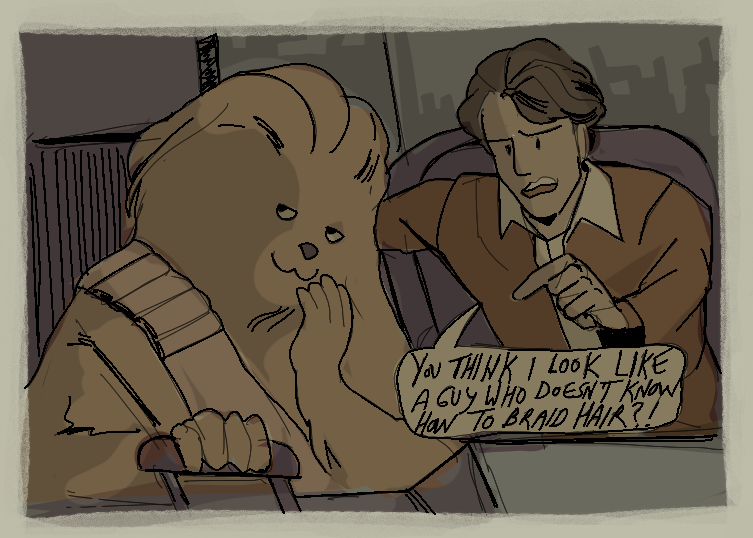 han solo? best damn braider in the galaxy. he once braided an entire wookie in twelve [improper units of measurement] 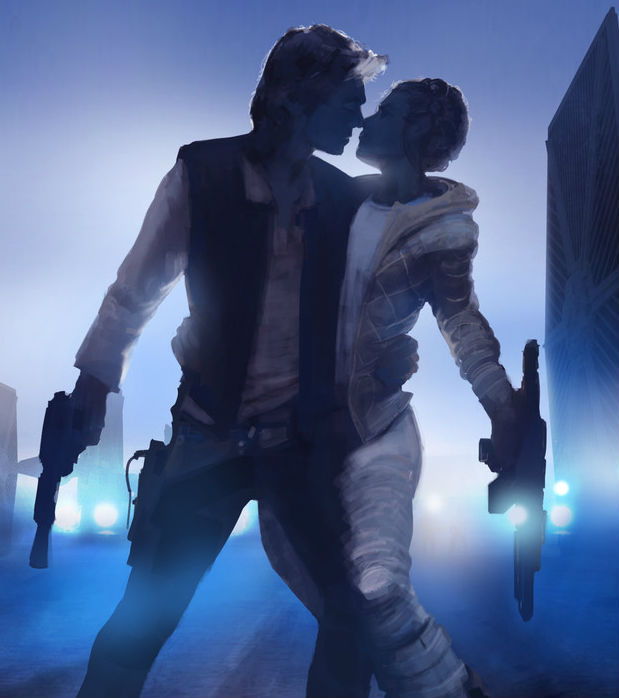