A film I was very excited to see, because I live in Leicester and saw snippets of both the car park dig and the King Richard III funeral! The man himself is interred in the Leicester Cathedral which I walk past all the time on the way to therapy.

Opposite the cathedral is the Richard III museum, which is fascinating and walks you through many of the same issues which were discussed in the movie.

Everyone around here seemingly knows someone who was involved with the discovery/dig story, I went to see the movie with someone who’s met the person Amanda Abbington played. So maybe I’m biased because I know the story so well, but-

Well, the good stuff first. As someone whose life has been touched by M.E. I appreciate that The Lost King portrays it as an actual disability (which it is), and that it shows that Phillippa Langley was drawn to Richard III because he too had a disability. And I like that this film shows fandom in a positive light. It’s the fiercely enthusiastic Richard III fan club who end up getting a lot of important things done. And also I can relate to Langley as, well, a fangirl, what with her developing a hyperfixation on something that was helping her navigate her own life.

Oh and Sally Hawkins was great, she’s great in everything.

But now I’ve learned about what all the controversy surrounding this film entailed, and seen exactly what was causing it… yeah. It casts Langley as the hero at the expense of everyone around her. Really, no professional historians thought to impose one map over another until she came along?

I can’t really see many folks in Leicester – a much more diverse place than portrayed here, by the way – being pleased about this movie, no matter the quality of the production and the acting, and I don’t blame Richard Taylor in the slightest for suing. If they wanted someone to represent sexist institutions in the film, why not make up a character instead of using a real person?! How terribly ironic that a film about how cruel it was to villainize one Richard ended up villanizing another.

Come see the museum instead.

The Lost King is out soon!

When I looked closely at the trailer, I saw my own alma mater does actually make a cameo!

The production was spotted in Friar Lane

So that Richard III movie is starting to happen now! I wonder if there’s a way I could get to town while they’re filming and watch a few scenes. Probably not, I dunno how they schedule these things.

But I am SO HAPPY to hear Sally Hawkins will be in it, playing Phillipa Langley! I’ve loved her ever since the Paddington movies.

So there’s going to be a movie about the finding of Richard III, starring Steve Coogan. I’m curious as to how this will go, not least because it was actually a woman called Philippa Langley who lead the project, and her story is fascinating but the biggest name attached to the film is playing… her husband…?

But I thought with that news fresh in everyone’s minds I could share a few photos/details of what it was like to be in Leicester when all that was going on!

*
A couple of days after the news that Richard III’s bones had been found in the car park, I went to check it out! There wasn’t much going on though. I guess because the actual bones had been taken away already?

That was in 2012. Flash forward a year and his reconstructed skull (not the real one) was in the Leicester Guildhall along with a bunch of other Richard III stuff.

It’s all been relocated to the Richard III museum now I think.

Then in 2015 there was the actual reburial ceremony…

I still have that pamphlet. At the uni it was absolutely packed, it’s lucky I was able to see anything at all. Oooh look I took a video as well!

So me/the crowds followed the coffin in the car back to the town center….

…and then I had to leave and go to work. But you get the idea!

In the days after that every business in Leicester was using Richard III to advertise their services. It was great for tourism.

Someone also put flowers on Richard’s statue. (This used to be in the park opposite my halls of residence, I think it was moved to its current spot before the reburial.)

And Richard III’s tomb now chills in Leicester Cathedral. You can drop in and see it anytime! 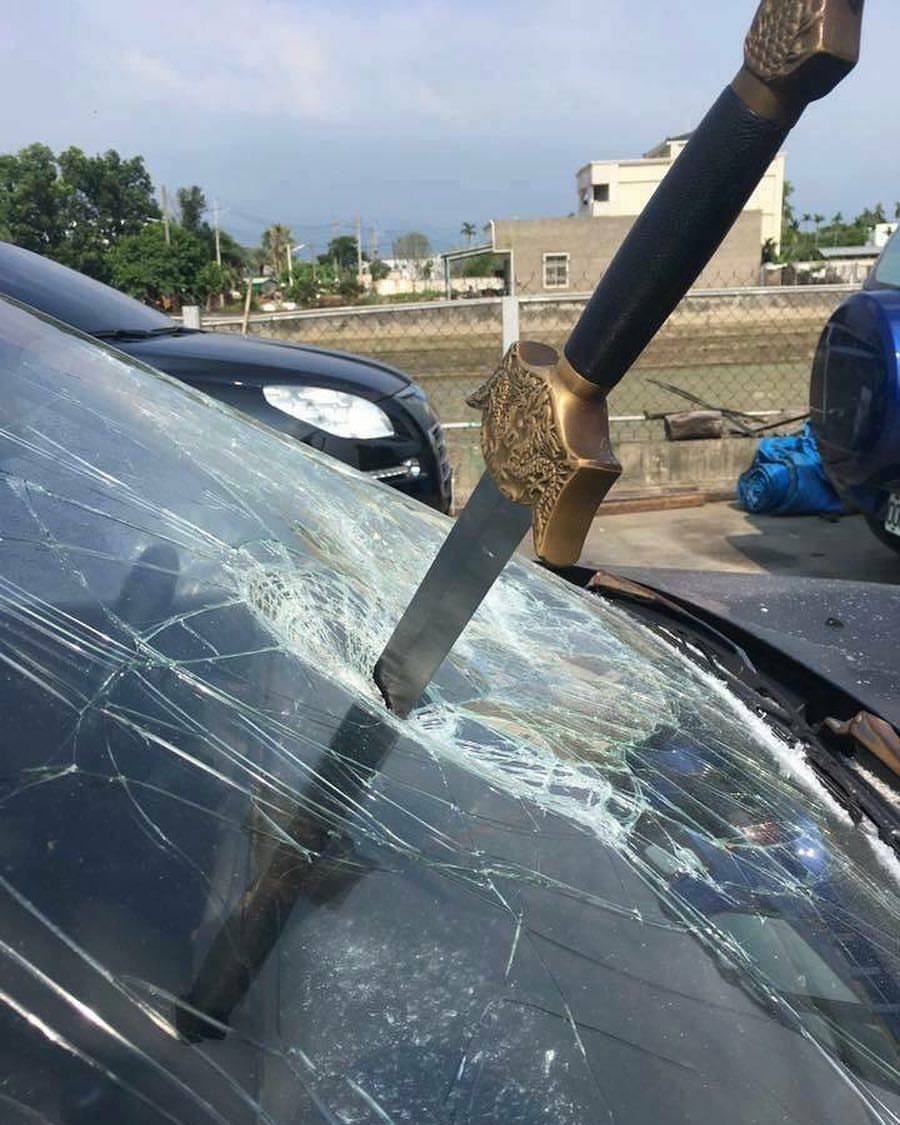 Whoever pulls this sword out is the true ruler of the parking lot. 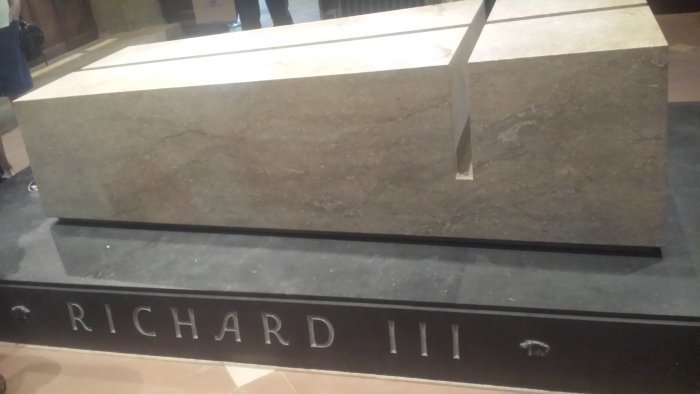 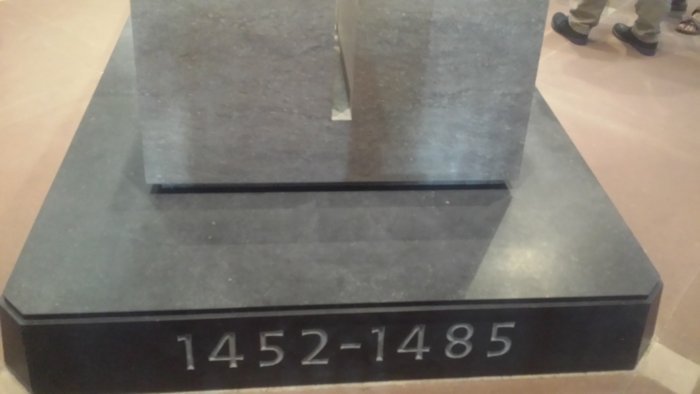 The Leicester Cathedral was open today, so we went in to see Richard III’s (very well-made) tomb

(But I didn’t catch any Pokemon in there. I don’t want any long-dead kings haunting me for being disrespectful.)

Today I went to the Richard III museum (despite living in Leicester, I have never actually been there) and discovered that our noble historical forebears a) invented a knife shaped like a weiner and b) called it ‘the bollock dagger’ 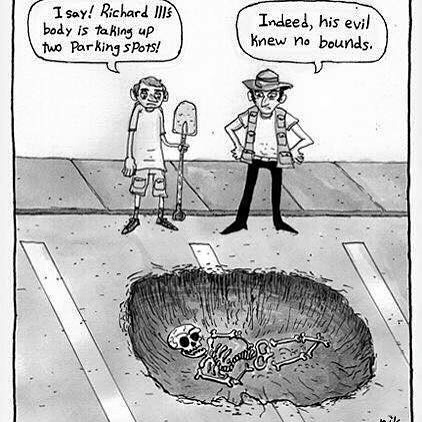 I love a good Dick joke.

Overly Devoted Archivist Uncategorized richard iii, this is I gather pretty much how it happened.... 0 Comments

I love a good Dick joke.