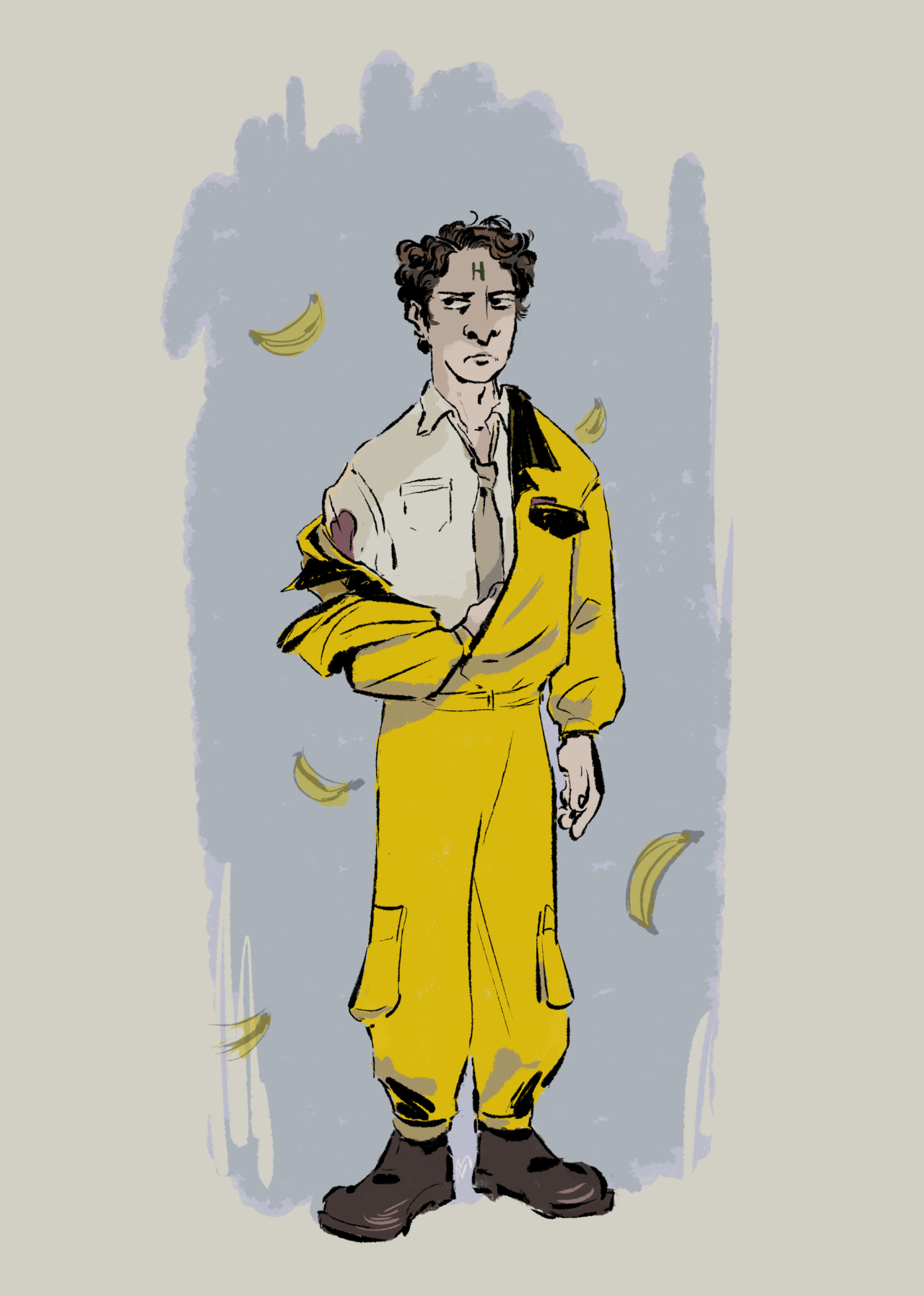 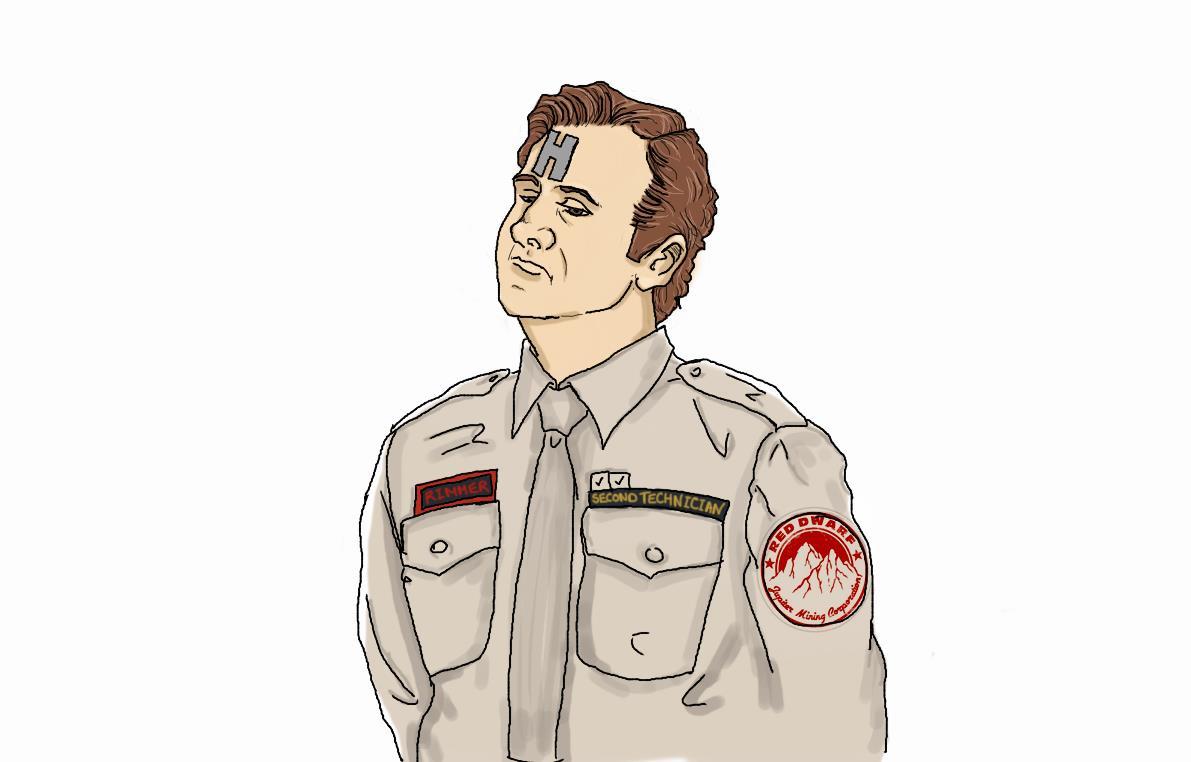 Arnold J Rimmer is an incredible bastard and he is also a sad man.

GOD this has been in the works for ages. I always say, you wanna know what a character is or why you like ’em, kill ’em. (Or worse.)

Okay so obviously I am deep in fandom hell when it comes to Red Dwarf now, there’s headcanons, there’s fanfiction, there’s everything! But naturally when that happens I start thinking something along the lines of “why do I like this thing?” And I think I know why I like Red Dwarf so much, beyond the jokes, I mean. It’s because almost all the time it’s constantly extolling kindness as a virtue.

Much of it revolves around Lister. Lister is that rarity of a sitcom character who’s a really geniunely good person. You wouldn’t expect him to be, considering his situation, but he is.

It’s Lister’s act of kindness in saving an innocent cat that kickstarts the whole plot of Red Dwarf and creates a whole new species in the world. (The Promised Land even points this out, I think.) It’s also Lister’s kindness which turns Kryten into more than a mechanoid and Cat into slightly less of uh, a cat. But most important of all I think is Lister’s relationship with Rimmer.

Lister has absolutely no reason to like Rimmer and he doesn’t. But, especially once he learns why Rimmer is the way he is, he does treat him like a person. Whether or not Lister likes Rimmer is completely irrelevant to whether or not he’s going to talk him out of suicide. And that strikes me as something really quite big and important, that just happens to be wrapped up in a big wacky-space-comedy bow.

Rimmer himself is another matter. There’s an extent to which he’ll always remain an arrogant little shit, because that’s where the comedy comes from, but we’ve seen him learn and grow over the years and the show indicates that a lot of that is Lister’s influence.

RIMMER: The Anubis stone? You can’t use that on him! I need it! It’s the only way for me to remain diamond-light! If I don’t recharge I’ll lose all my superpowers!

LISTER: [putting his hand on Rimmer’s shoulder] Mighty… We’re gonna have to. All great superheroes put the needs of other people before themselves.

RIMMER: Not all superheroes. What about the Fickle Four, who save only those wearing designer clothes? Or Doctor Dodgy, who saves people but first asks them to step behind a curtain and remove their underwear? [Heavy sigh] I knew this was too good to last. [Gesturing to the Anubis Stone] What do I do?

Red Dwarf is a big ol’ daft sitcom with continuity leaking out all over the place, but its beating heart has always been “SEE? SEE? PEOPLE CAN MAKE EACH OTHER BETTER!” You know… life has thrown you some curveballs, you’re trapped in deep space and everyone you ever knew is dead. Why not be kind?

Why not give some sunlight to someone who you don’t like, but has none?

While browsing the Red Dwarf wiki I found this little tidbit on the page for “Siliconia”:

Oh, I never noticed that, ow my heart. Here’s the scene in question from “Siliconia”-

RIMMER: I like being a mechanoid. I don’t have to become an officer anymore, compete with my brothers. Envy, ambition, that acid ball of resentment I carried around with me the whole time, it’s gone.

LISTER: We have to get your neuroses back!

RIMMER: But sir, I don’t want them back.

LISTER: Then what makes you you?

RIMMER: I don’t want to be me. I want to be a mechanoid, programmed to serve. Sometimes when I was young I’d sit for hours staring at our fish tank feeling envious.

CAT: You wanted to be a fish tank?!

RIMMER: I wanted to be a fish. They had food, a small rock to swim in and out of, they didn’t have a care in the world.

CAT: That’s cos I wasn’t there!

RIMMER: Those little fish, they’d never know what it was like to fail and disappoint. They’d just swim around in circles, not a thought in their heads. And it’s the thinking that causes all the pain.

And way, way back, thirty years ago, during the very first episode of the show-

LISTER: Not until you pass your engineer’s exam. And you won’t do that
because you’ll just go in there and flunk again.

RIMMER: Lister, last time I only failed by the narrowest of narrow
margins.

LISTER: You what? You walked in there, wrote, “I am a fish,” four
hundred times, did a funny little dance, and fainted.

LISTER: No, it’s not! Petersen told me.

RIMMER: (Mocking LISTER) “No, it’s not! Petersen told me.” Lister, if
you must know, what I did was, I wrote a discourse on power circuits
which was simply too radical, too unconventional, too mould- breaking for the examiners to accept.

LISTER: Yeah. You said you were a fish.

The Siliconia speech might not even have been an intended nod to continuity, but dang… Rimmer is only happy when he’s a fish.

it’s me, your (least) favorite hologram

The other night I watched Out of Time, the Red Dwarf season 6 finale, having not actually watched it in waaaaay too long. And oh man I forgot how important an episode for Rimmer it is. “I say fight!” is huge for him! Probably the biggest jump forward in his characterisation pre-the Dave era! And then it’s… sort of forgotten about, but eh.

“Better dead than smeg!” is such a good line. It’s funny, because obviously the word Smeg is always smegging funny. But then you think about what he’s actually saying there, what he’s saying about his future self (who isn’t a million miles away from his past self)… “I’d rather die than be that person, an unequivocal bad guy who enables fascists.”

(And of course in the episode prior to this one Rimmer was trapped for six hundred years with nothing but even worse versions of himself around, probably leaving him a lot of time to muse on his bad qualities. He’s not about to let another incredibly evil version of himself run rampant! Makes sense, right?)

I always so dearly love what can only be called I’ll Never Turn To The Dark Side moments and this is such a good one. I wish it’d gotten more attention and callbacks within the show itself. (I suppose it was technically also setting up for Ace in the next season, if they’d had that planned at that point, I have no idea, but…) It’s just, Rimmer is such a fascinating character because there is honour underneath the smug git surface, it shows up so rarely but he (and Lister too) definitely know it’s there, just so hard to reach. Which is just another of the many, many tragedies of the characters of this dumb space sitcom.

Moonlight of the Red Dwarf variety

Going back over old Red Dwarf posts and man, I forgot how much…the actual show sort-of-but-not-quite shipped Rimmer/Lister. Or kind of? (I mean, there was a kiss, fake though it was.)

Honestly, of all the situations I expected to find myself in this month, “suddenly hardcore shipping the two main characters of a comedy TV show you’ve loved for ages but never considered that way (while the world is in the middle of one of the worst crisises in decades)” is… not one of them. Ah well. What I do really miss is being In Fandom, I guess. Having a sort of fandom central hub (LiveJournal and then Tumblr used to serve this function) where you could just run in and shout “I LOVE THIS THING” and get a chorus back of “WE ALSO LOVE THIS THING.” I suppose Twitter is sort of the fandom central hub now but Twitter just doesn’t work as a platfom for me because you can’t have long conversations.

Anyway, it also so happens that Red Dwarf continuity looks like this:

except even more nonsensical, so I’d be really bad at being a Proper Fan of it. (I still haven’t actually watched Back to Earth since… heck, probably since it first came out. What the smeg was that?)

Throw into that the fact that I guess I’m sort of too old for Shipping now anyway, and… well, I’ll just be here on the sidelines, reblogging all the lovely Promised Land meta and fanart and jazz to secret side social media accounts and so forth.

But, man Promised Land told such a beautiful story. I’m an absolute sucker for “characters who are two halves of the same whole whether they like it or not” relationships, and I never realised there was one right under my nose for going on a decade. Whaddya know.

I think when Rimmer says to Lister at the end, “There’s a moon here, Listy, that wouldn’t mind some sunlight,” what he’s really saying is “We’re about to die. Please be with me,” and ouch, my heart.

I really do love this thing.