A Superman colourist has sensationally quit over changes to the new bisexual Man of Steel’s motto. DC Comics announced earlier this month that Jonathan Kent will be a different kind of Superman to his famous father. He combats climate change disasters, protests against the deportation of refugees and is going to be in a relationship…

Nobody tell this guy that the motto has in fact changed several times before.

I always felt bad for Brandon Routh. He gets given one of the most coveted roles in the movie world and then the film flops. (Annnnd was directed by a man we can now be fairly certain is a sex offender, but I digress.)

But here he is! I don’t really love the costume but look at the face! That is a Superman Face. I also have never seen any of the DC TV Universe despite wanting to, but I wish him the best of luck! 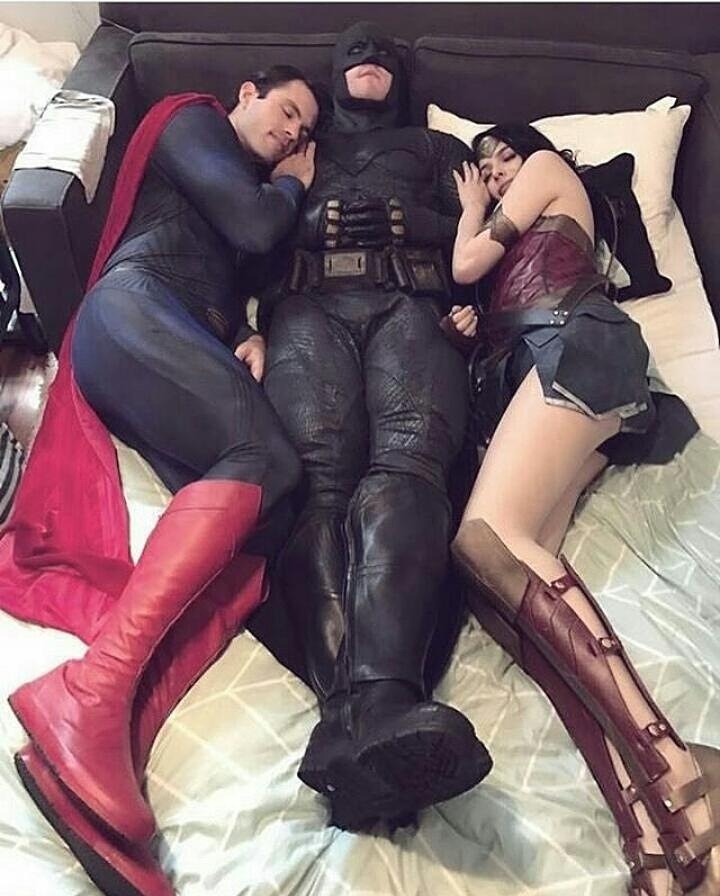 This is my new fav picture.

The best part about this is that it’s completely plausible that it’s a totally casual thing. The Justice League has to crash in a hotel room together and share a bed. We already know Diana has no qualms about sharing her bed with men without any sexual connotation to it. And Batman and Superman are bros (usually depending on your preferred continuity), so this is basically just Superfriends cuddling in bed like it’s casual.

They’re also on a fold-out sofa which suggests they are, in fact, in the basement of the Kent family home.

Ma Kent is not going to be pleased when she sees all three of them are still wearing their shoes.

Clark: Would you relax?

Clark: Look, if you’re not comfortable…

Diana: Both
your flanks are guarded by people who can punch out mountains. Clark
has super-hearing. You have literally never been safer in your life.

ECLIPSE SAFETY IS IMPORTANT NO MATTER WHAT PLANET YOU’RE FROM

OH MY GOD, you guys,

so Metropolis, IL (pop: 6,000) is a small farming town in southern, il (the closest airport is paducah, kentucky) that has so far previously been known only for putting a 15′ fiberglass Superman at the end of main st. (ok, technically, Market St)

complete with a superman ‘museum’ (gift shop) across the street

(side note, turns out I am secretly an asshole hipster snob because I refuse to wear any superman shirt that did not come form this store. i just sent my mother to secure a new one, which is actually why i got the snapchat that lead to this post)

This is, like, “World’s Largest Ball of Twine” quality of American tourism. A++ Americana, should absolutely have appeared in an episode of Supernatural (except for the, you know, the copyright/trademark issues and for how SPN is filmed in, you know, Canada).

BUT if you google this statue today, right now, 8/21/2017, 11 am, you’ll notice something about google’s people tracking:

BECAUSE Metropolis, Illinois (pop: 6,000) is IN THE PATH OF THE ECLIPSE.

A fact they have apparently prepared for because I got a fucking snapchat from my family (assholes, i’m so pissed i couldn’t go), and I noticed a small but AMAZING DETAIL (not counting the fact that the cousin forced to pose in front of the statue was named Lex, good job, mom).

THEY GAVE HIM ECLIPSE GLASSES, GUYS. I’M SO HAPPY.

Is he depowered today?

diana of themyscira, princess of the amazons, someone who has been trained since she was young in the art of cracking open a can of whoop ass by the master of cracking open a can of whoop ass: [in attempting to kill the god of war, straight-up murders the wrong dude with a sword, who was very clearly an evil asshat but was just a regular evil asshat that just totally got skewered and no one reacted particularly badly to it, THEN murders the god of war who is not promising the impending death of seven billion people]
clark joe kent, an average clark joe with superpowers, has not once for a day in his life been trained in how to fight someone because he lives in a world that is made of tissue paper and could crack someone’s skull if he sneezed too hard, literally started this whole ‘superman’ thing like five minutes ago: [murders a man who is actively endangering hundreds of thousands of lives right at that moment, is promising the impending death of the rest of all seven billion people, and is currently shooting laser beams out of his face at an innocent family]
y’all: oh my god! there’s a heroism to gadot’s wonder woman that cavill’s superman just doesn’t have! 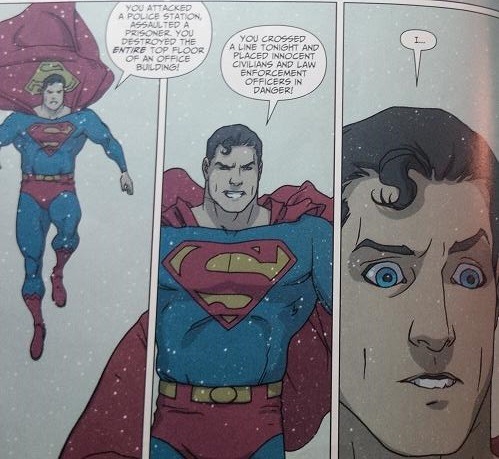 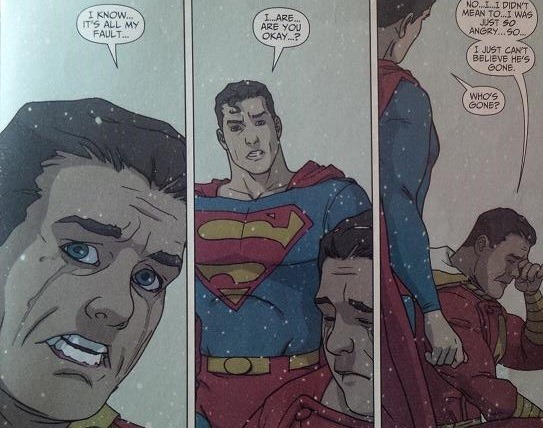 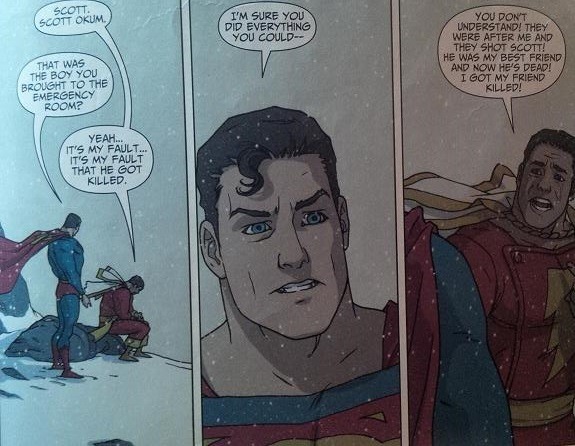 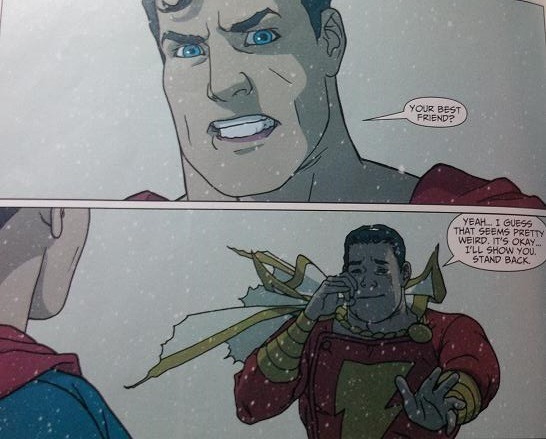 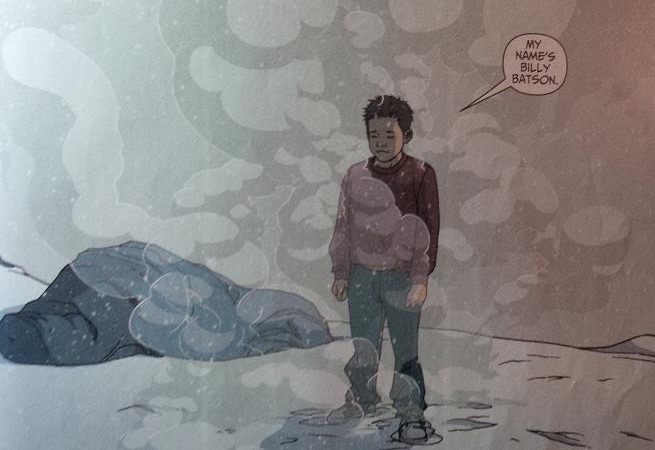 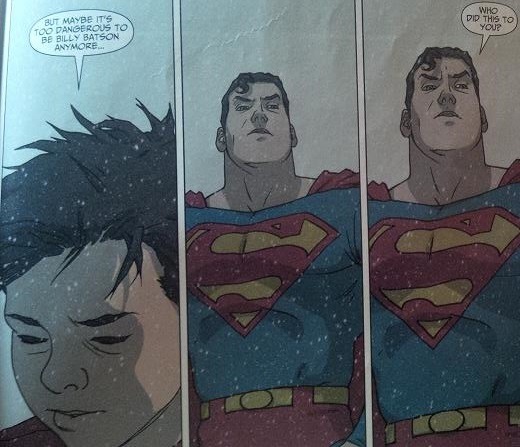 Oh Billy, you look so small right there…

Superman’s sheer anger over Billy Batson’s situation is a sight to behold. Batman and Robin get away with it because he knows it’s the world’s best internship and that Bruce is willing to put out all the stops to protect him. But Billy? He doesn’t have anyone looking out for him. And that pisses off Superman more than anything.

Next page he really lets the Wizard Shazam have it.

Shit, son. I might have to buy this book for those last two panels alone.

When Superman is written well he is an amazing goddamned character.

these few pages are some of my favourite in comic book history. So good. For anyone wondering what the next few pages look like, here you go: This is a bigger deal than some of you might think, because Superman is one of the heroes in the DC Universe who keeps his secret identity pretty damn secret, because as probably the most powerful and influential person on earth, a lot of people do not wish him well – and would jump at the chance to hold people dear to him as leverage.

Yet, he trusts this poor, scared little kid. To comfort him, and entrust him with his biggest secret – just as Billy did for him.

EDIT: This is from the mini-series Superman/Shazam: First Thunder, for those wondering. 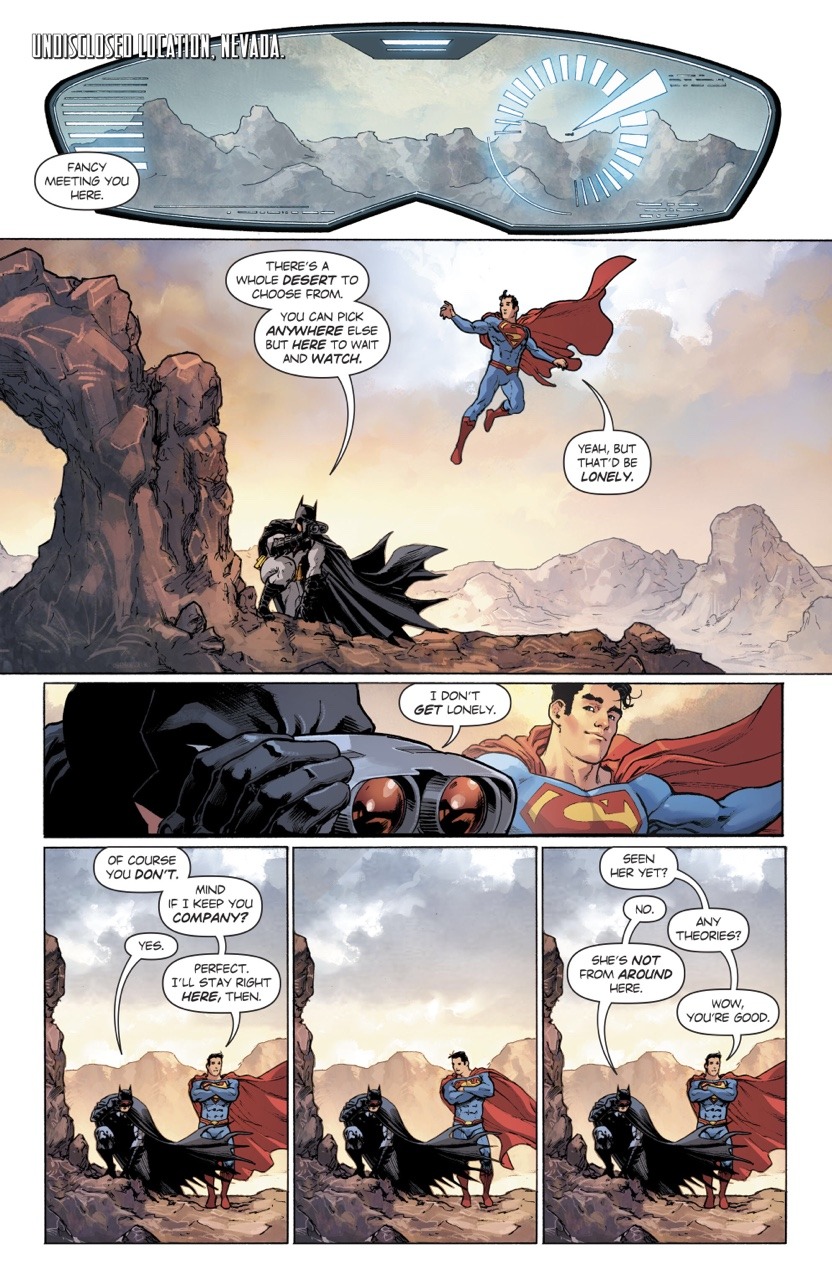 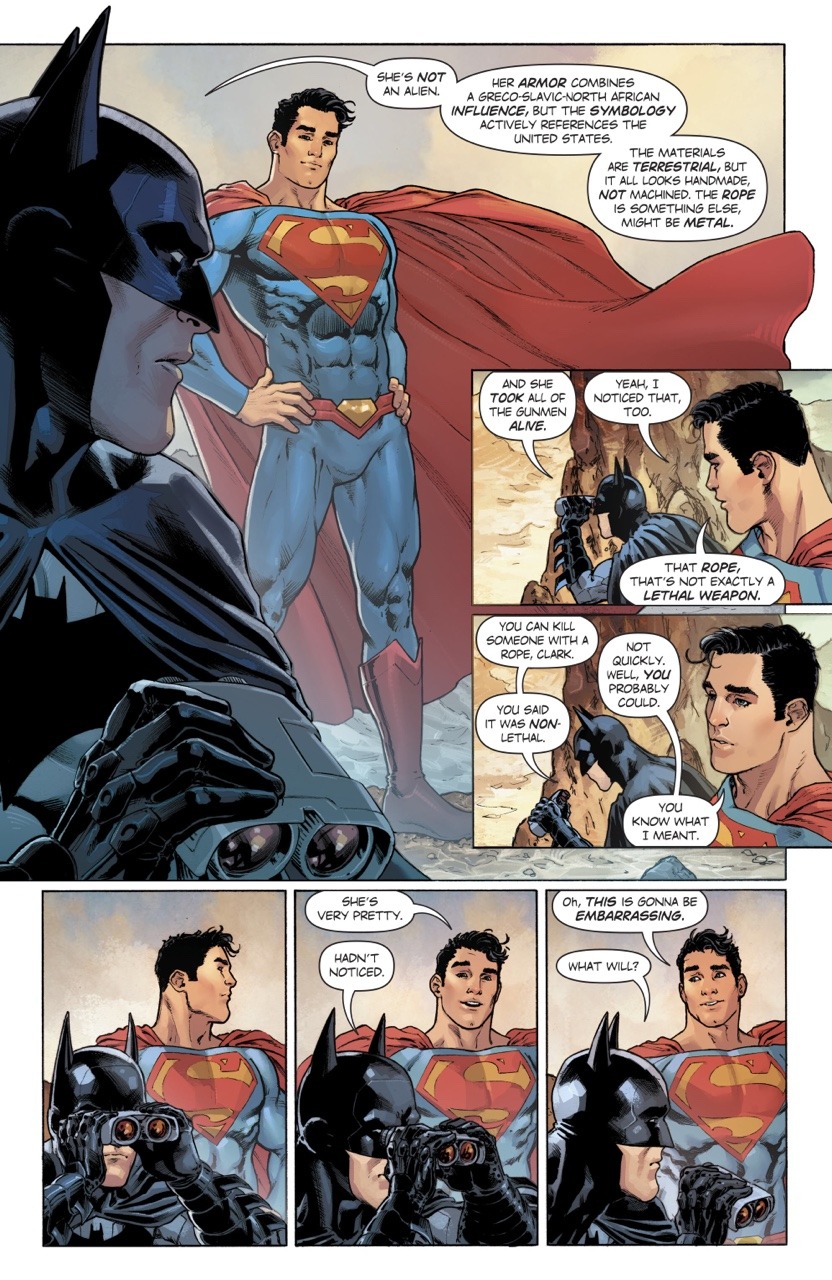 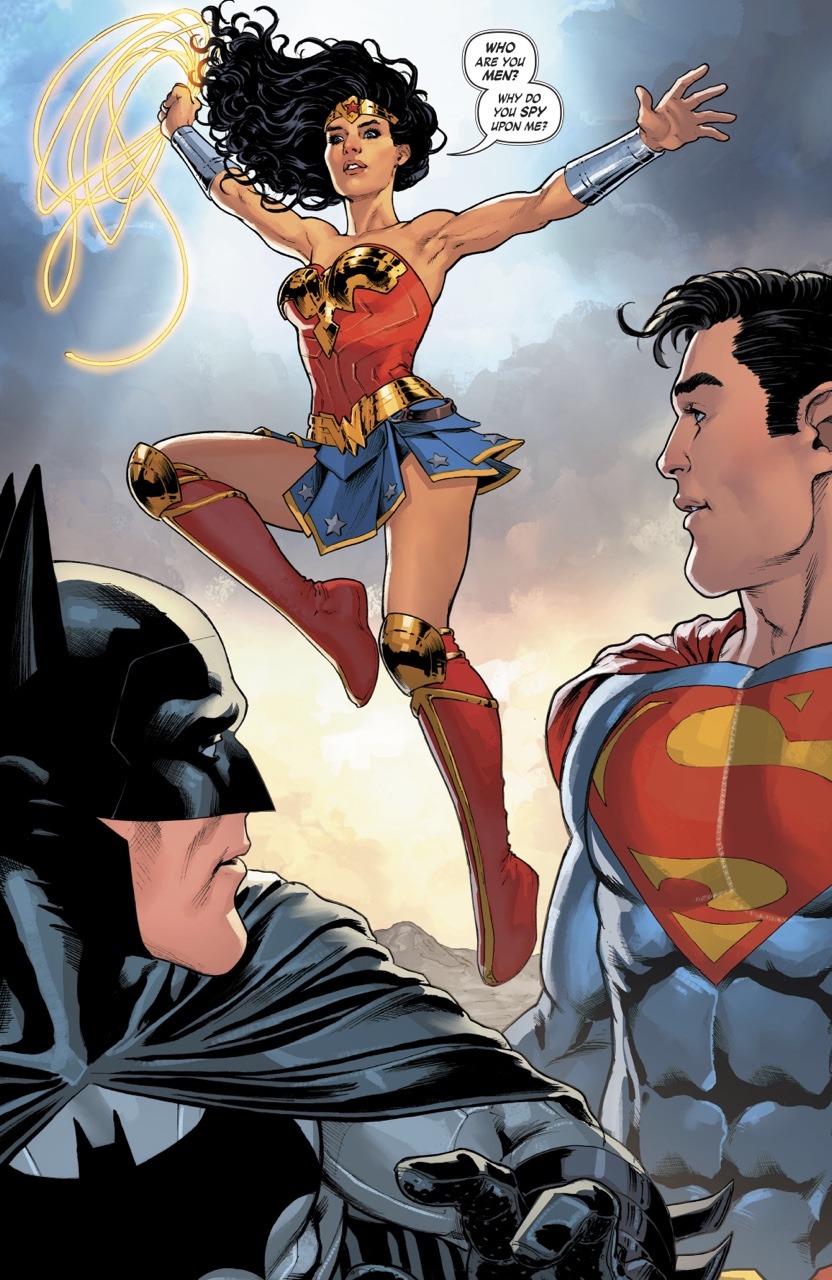 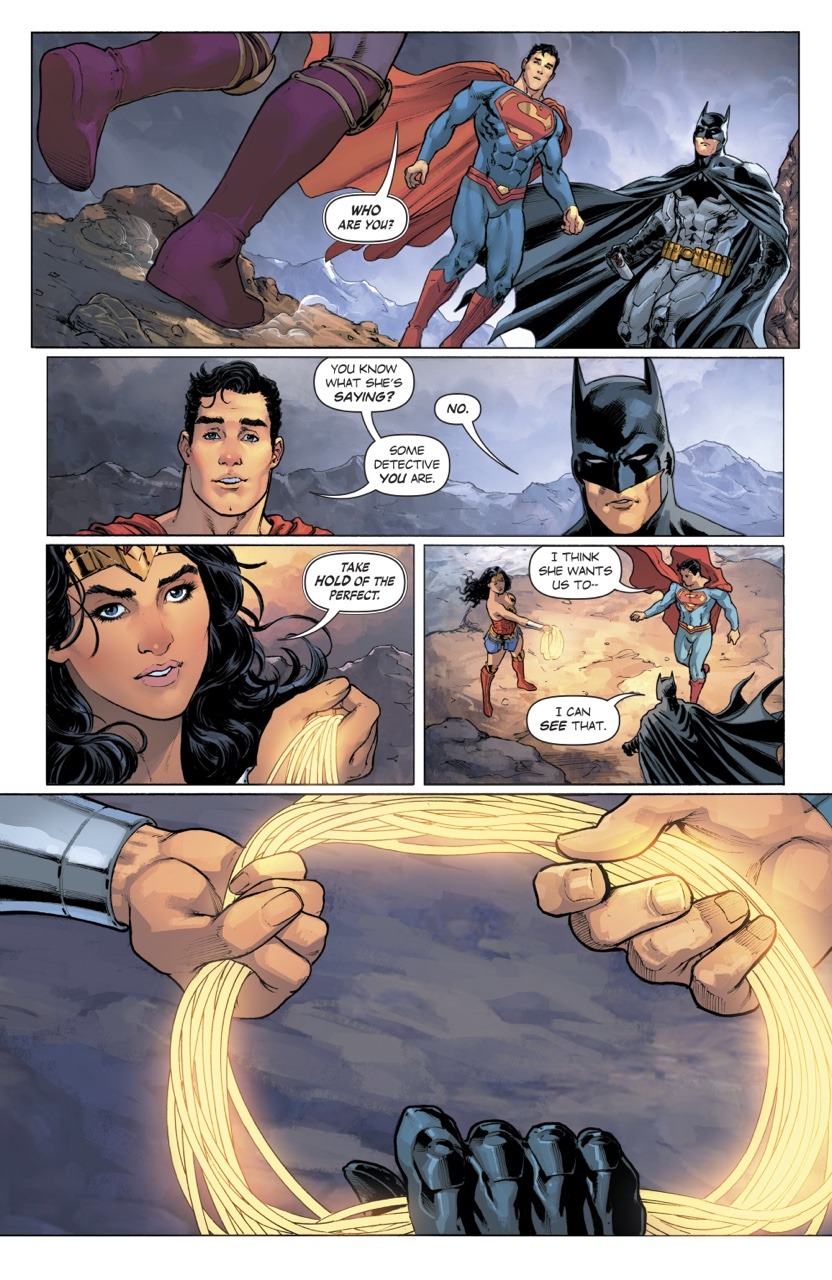 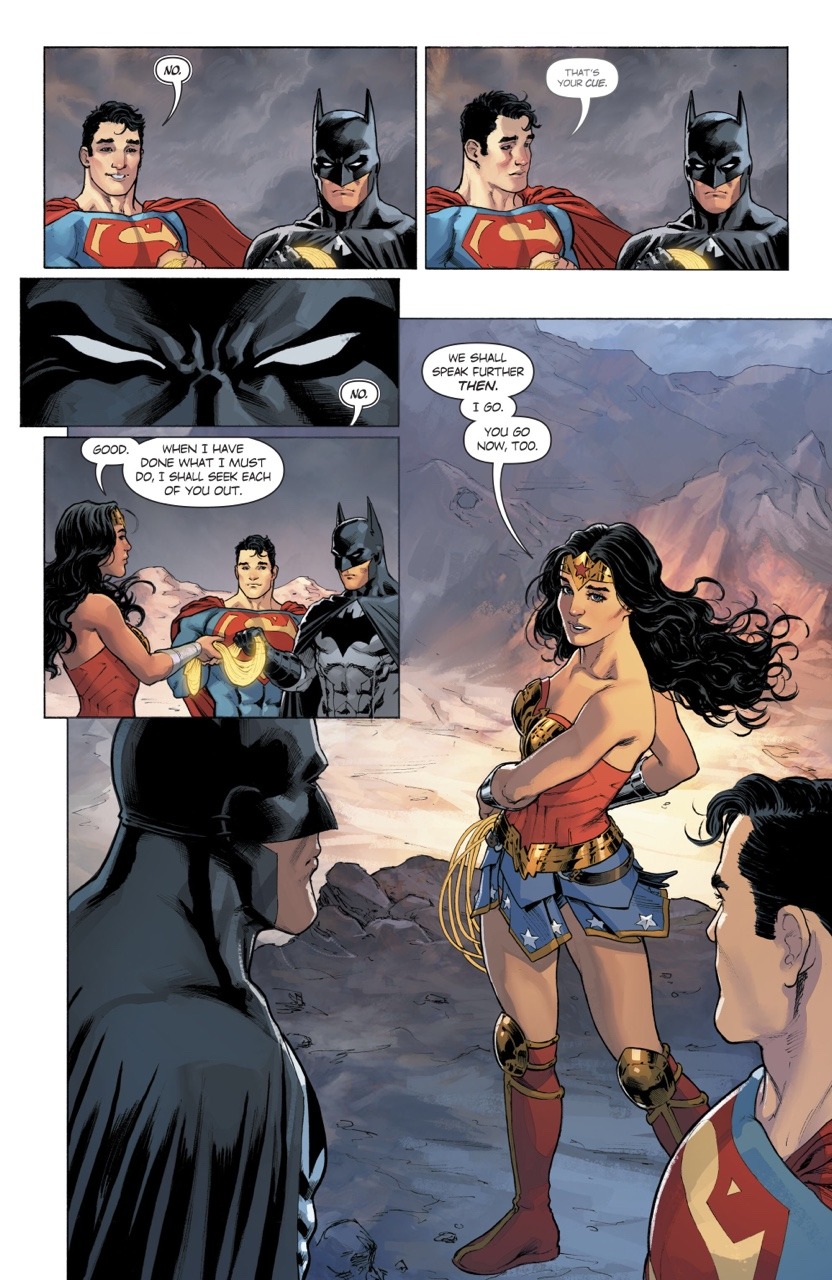 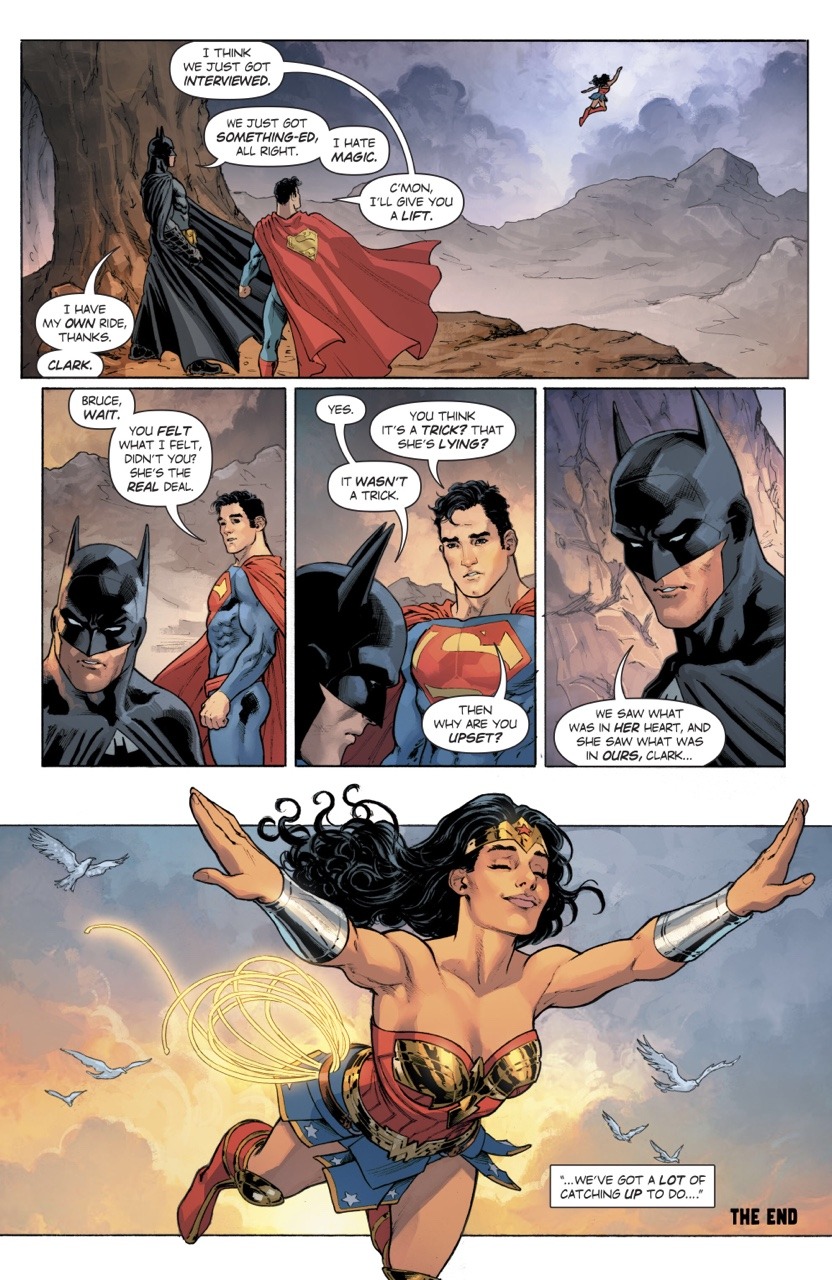 This is such iconic moment right here and I want to share it will all of you.

“…and the American way”

This piece by Harebrained Schemes art director Mike McCain is so gorgeous and I love it and if you want a print of it, you can buy it here.

The Chronological Superman 1959:
A cutaway image of Superman all-enclosing lead armor – a defense against a kryptonite-infused Lex Luthor – is presented for the reader’s edification in Action Comics vol.1 No.249.

what a weird dick’s-eye view camera

Oh, man, if you punch Superman in the dick, he can’t see anymore!