I never quite got the hang of what I wanted my Tumblr to be. I think it’s one half me trying to come across as a serious adult, and one half, well-

The controversy over the ‘Ground Zero Mosque’ got me thinking about when I went to Ground Zero. It was on a school trip, we were a bunch of teenagers, and it felt very odd being at what was basically a mass grave. There wasn’t much there and some kids were messing about in the lift, and that felt pretty wrong, laughter in that place.

I didn’t take any pictures (just one of the church opposite) because I would probably have felt vaguely guilty every time I looked at it. And that…well, that’s it really.

I say build the mosque, build lots of things there, don’t have it be a grave but a memorial. But I don’t live in New York, and I wasn’t there, so I know it’s not up to me to decide.

I think I’m depressed, or I have an anxiety disorder, or probably both. Life just got so astonishingly difficult a few years ago. I’d have thoughts about terrible things, and I could never convince myself that they wouldn’t happen, and I’d do things to make sure they wouldn’t happen, even though no matter what I did I’d still be scared. It started in 2007 and it’s still going.

I don’t have a job and my entire life seems to be focused around my…whatever it actually is, just panicking all through the day and all through the night that I might have done something and caused something bad, or that something bad might have happened for no reason, or that I’m ruining everyone’s lives. Possibly deep down I know that I’m being irrational, or just stupid, but I can never convince myself. I read books and websites (Psychcentral is pretty good) and go to the doctors, but nothing seems to have helped yet. I am incredibly lucky to have such a supportive fiance, but I just really wish I was better.

Anyway, it’s at the point now where I just want to tell everyone about it because hiding it isn’t doing me any good.

(I hate walking in high heels.)

Wonder if I am a bad person for not doing enough about Big Problems. Never doing enough, ever.

not so sudden revelation

Oh my god I am completely unprepared to deal with adult life.

Ended up going to see Watchmen again, mainly because it was an excuse to hang out with some friends. Still don’t really like it.

It’s Islam Awareness Week. Or it is at my uni anyway, I don’t know about everywhere else. There was this thing in a tent where you could try on a hijab, so I did. When I left I wondered what it would be like to wear one all the time, and if I’d get treated differently because of it. I thought about the whole white privilege thing. Unfortunately none of these thoughts seem to be able to arrange themselves into coherent sentences. I will post more about that some other time, though.

Here’s some photos of what Leicester looked like yesterday.

This is the park. People were chucking snowballs and making snowmen. I actually quite like the snow, despite the cold, because…well, I suppose it brings something out in people.

I didn’t appreciate the snowballs that were chucked at me, though. :p

This picture came out pretty:

The other day I was reading a book about my old school. My old school was quite cool in many ways, so I thought maybe I should talk about it.

The book was The Cedars by Richard Hart, and all pictures are scans from there. I’m hoping I’ve not stepped on anyone’s toes.

This is the Cedars, one-time home of Mary Norton and the house in which The Borrowers is set. It’s also where I went to school. When I went there it was called Leighton Middle; once upon a time it was called (like the house) The Cedars. The Cedars has now become a high school and moved across town. 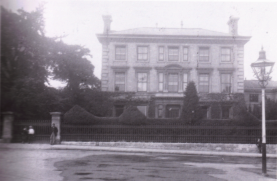 This here’s the building me and my classmates called The Old House. It was built by John Dollin Bassett in 1855. His desendant, Mary Ann Bassett gave her name to another school in the area.

The Bassetts were apparently a pretty cool family- Mary Ann set up a school to teach disabled children in 1890.

The Old House was noisy, any sound you made in any of the upper rooms could be heard in the room below and we were supposed to always walk and sit down quietly when we were in there. It also had a great view of the high street from the highest rooms. When I was in Year Eight I sat next to the window that looked down on All Saint’s Church grounds, and it was fun to see people going about their business unaware that I was taking my mind off work by watching them.

Round the back of the house were the lawns. Students weren’t allowed to walk on the lawns unless given permission, in case we damaged them, apparently. We would watch the teachers walking across the grass in their high heels and wonder about that.

Once someone dared me to run across the lawn nearest to the staff room. I did. It gave me a feeling of freedom. 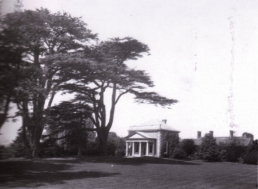 This was called the Exhibition Room, although as far as I remember very few exhibitions took place there. None of us schoolkids were allowed in there and the doors were always locked. I think I went in there only once or twice the entire time I was at Leighton Middle. 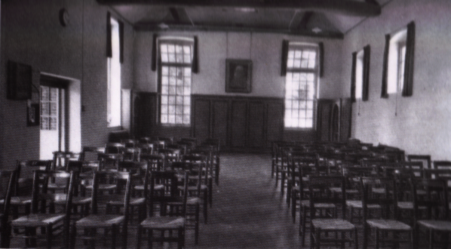 This is the school hall. It hasn’t changed much since 1924.

It’s been used as a banquet hall, classrooms, and for storing German prisoners during World War One. The German prisoners apparently carved their names into the roof beams. I’ve never seen any carvings. Maybe they replaced the beams.

These days it’s the assembly hall. There’s a picture of someone at the front- I’m not sure, but I think it’s a picture of Fred Fairbrother, the school’s first headmaster. From what I read about him he seems mildly eccentric. He had a yellow car (pretty unusual atthe time), and was hugely patriotic and would read Churchill’s speeches out to his students.

In the picture he looks like quite a nice man. If it’s him. 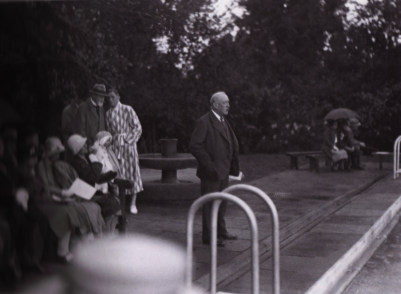 The swimming pool was opened in 1934. That guy in the picture is Mr Green, chairman of the governors. It would have been nice to have a swimming pool at school, but we didn’t. When I went there, the swimming pool was drained, full of leaves and occasionally was home to a family of ducks. Going anywhere near there was absolutely forbidden, they were probably afraid we’d fall in.

Next to the swimming pool was the memorial gardens, commemerating the people from the school who died in WWI and WW2. To the side of that there was a foresty area which led to the nearby brook. The brook was surrounded by a fence, for obvious reasons, and we weren’t meant to go in the trees. I think sometimes we were allowed down there during PE, though. 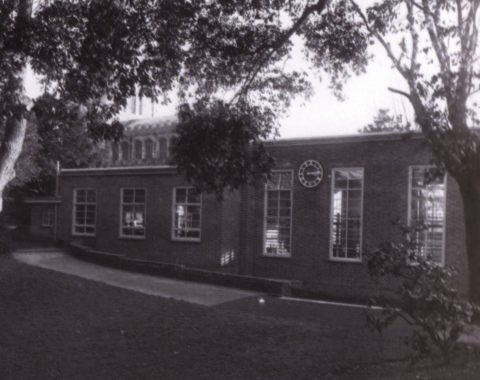 Speaking of which, this is the gymnasium. It was opened in 1939, I never knew it was that old. Like the hall, it hasn’t changed much.

I hated gym. Who doesn’t?

This is where the Year Five and Year Six classrooms were (and presumably still are). It was opened in December 1929. Inside the foundation stone are a boy’s cap, a girl’s hatband, and other souviners of the era. I can’t help wondering if anyone will ever actually discover these. 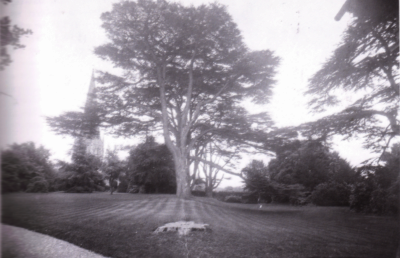 The school grounds contains loads of trees. It was really quite cool going to a school which took such pride in its surrounding nature.

The one in the picture I’m not sure is there anymore. But I remember a tree outside the dining hall which was easy to climb. We weren’t allowed to climb it but people did anyway.

The school’s motto was ‘Veritate Gaudete’ which means ‘rejoice in the truth’. When I went to Leighton Middle I believe it had a ‘statement’ instead of a motto, which I hated. Something about ‘personal excellence’. Which is all well and good but I’d have rather had something short and simple. However the Cedars High school did, I believe, adopt the motto. I think it used to be on the front of the planners they handed out.

I rather miss Leighton Middle. Sort of. I mean, I pretty much hated it while I was there, because you’d be hard pressed to find anyone who likes school when they’re thirteen, but still. I miss the trees.

Overly Devoted Archivist Uncategorized me, not a joke 0 Comments