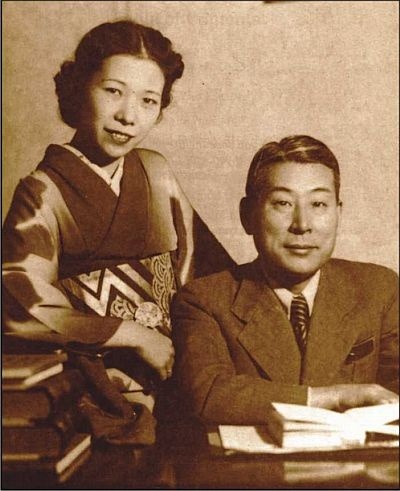 Chiune Sugihara. This man saved 6000 Jews. He was a Japanese diplomat in Lithuania. When the Nazis began rounding up Jews, Sugihara risked his life to start issuing unlawful travel visas to Jews. He hand-wrote them 18 hrs a day. The day his consulate closed and he had to evacuate, witnesses claim he was STILL writing visas and throwing from the train as he pulled away. He saved 6000 lives. The world didn’t know what he’d done until Israel honored him in 1985, the year before he died.

Why can’t we have a movie about him?

He was often called “Sempo”, an alternative reading of the characters of his first name, as that was easier for Westerners to pronounce.

His wife, Yukiko, was also a part of this; she is often credited with suggesting the plan. The Sugihara family was held in a Soviet POW camp for 18 months until the end of the war; within a year of returning home, Sugihara was asked to resign – officially due to downsizing, but most likely because the government disagreed with his actions.

He didn’t simply grant visas – he granted visas against direct orders, after attempting three times to receive permission from the Japanese Foreign Ministry and being turned down each time. He did not “misread” orders; he was in direct violation of them, with the encouragement and support of his wife.

He was honoured as Righteous Among the Nations in 1985, a year before he died in Kamakura; he and his descendants have also been granted permanent Israeli citizenship. He was also posthumously awarded the Life Saving Cross of Lithuania (1993); Commander’s Cross Order of Merit of the Republic of Poland (1996); and the Commander’s Cross with Star of the Order of Polonia Restituta (2007). Though not canonized, some Eastern Orthodox Christians recognize him as a saint.

Sugihara was born in Gifu on the first day of 1900, January 1. He achieved top marks in his schooling; his father wanted him to become a physician, but Sugihara wished to pursue learning English. He deliberately failed the exam by writing only his name and then entered Waseda, where he majored in English. He joined the Foreign Ministry after graduation and worked in the Manchurian Foreign Office in Harbin (where he learned Russian and German; he also converted to the Eastern Orthodox Church during this time). He resigned his post in protest over how the Japanese government treated the local Chinese citizens. He eventually married Yukiko Kikuchi, who would suggest and encourage his acts in Lithuania; they had four sons together. Chiune Sugihara passed away July 31, 1986, at the age of 86. Until her own passing in 2008, Yukiko continued as an ambassador of his legacy.

It is estimated that the Sugiharas saved between 6,000-10,000 Lithuanian and Polish Jewish people.

It’s a tragedy that the Sugiharas aren’t household names. They are among the greatest heroes of WWII. Is it because they were from an Axis Power? Is it because they aren’t European? I don’t know. But I’ve decided to always reblog them when they come across my dash. If I had the money, I would finance a movie about them.

He told an interviewer:

You want to know about my motivation, don’t you? Well. It is the kind of sentiments anyone would have when he actually sees refugees face to face, begging with tears in their eyes. He just cannot help but sympathize with them. Among the refugees were the elderly and women. They were so desperate that they went so far as to kiss my shoes, Yes, I actually witnessed such scenes with my own eyes. Also, I felt at that time, that the Japanese government did not have any uniform opinion in Tokyo. Some Japanese military leaders were just scared because of the pressure from the Nazis; while other officials in the Home Ministry were simply ambivalent.

People in Tokyo were not united. I felt it silly to deal with them. So, I made up my mind not to wait for their reply. I knew that somebody would surely complain about me in the future. But, I myself thought this would be the right thing to do. There is nothing wrong in saving many people’s lives….The spirit of humanity, philanthropy…neighborly friendship…with this spirit, I ventured to do what I did, confronting this most difficult situation—and because of this reason, I went ahead with redoubled courage.

He died in nearly complete obscurity in Japan. His neighbors were shocked when people from all over, including Israeli diplomatic personnel, showed up at quiet little Mr. Sugihara’s funeral.