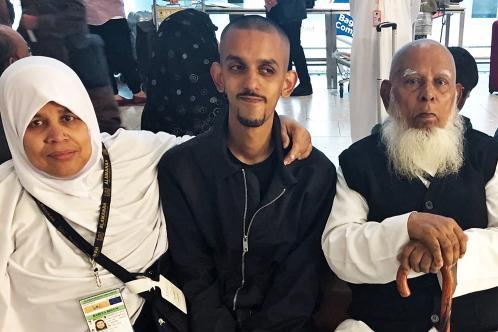 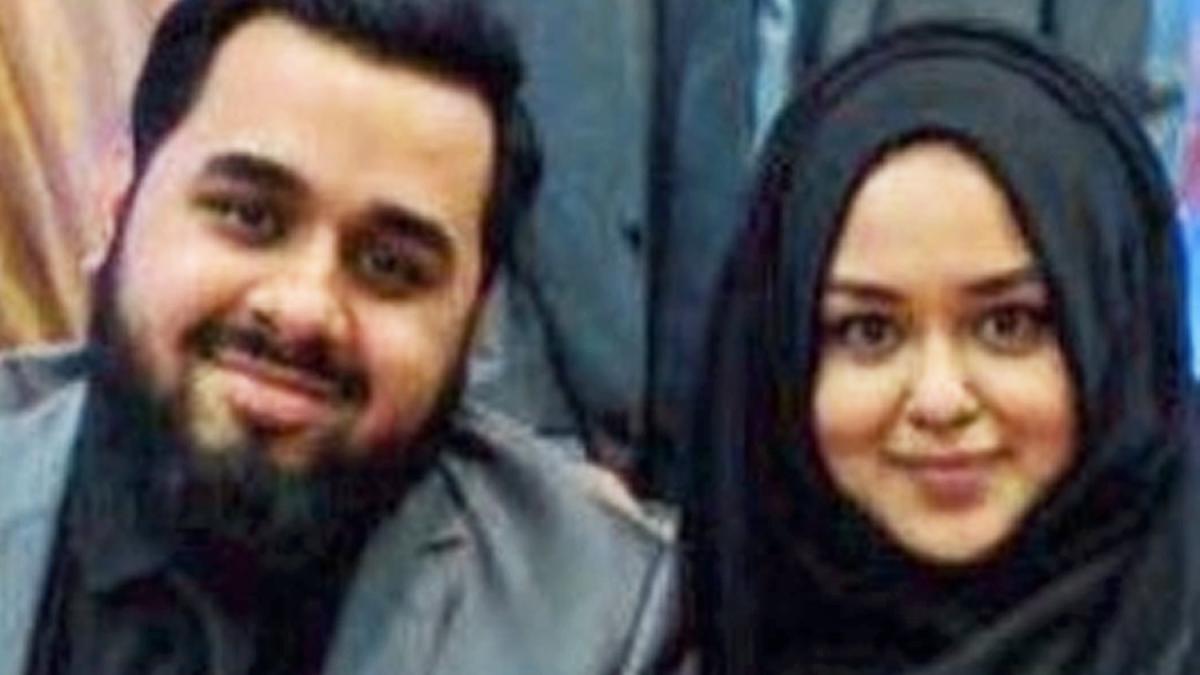 (Rabia) with her arm around her son (Hamid) who is next to her husband (Kamru). Image 2: A smiling man (Hanif) next to a smiling woman (Husna)]

Part 20 of a series of posts honoring the Grenfell Tower victims.

The Begum family, from the 17th floor of Grenfell Tower

Husna, Hanif and Hamid Begum reportedly told relatives over the phone that they couldn’t bear to leave the building without their elderly
parents, Rabia and Kamru. They all died in the same flat.

One of their cousins, Samir Ahmad, talked about them to The Times. He mentioned that Kamru had disabilities, a fact that also came up in the inquiry when his son questioned why he had been placed on the 17th floor.

“Their dad could barely walk anyway. What were they going to do? Abandon him?…Hats off to them. They didn’t show cowardice. They stayed with their mum and dad.

“Family was so important to them. They lived together and they died together.”

Husna was due to get married the next month. “The last time
I saw her, all she could talk about was the wedding. Everything was arranged, all the invitations were sent. She was looking forward to it, getting married to the person that she loves,” her cousin Abdul Khan said.

Husna worked at Carphone Warehouse and was 22 years old when she died. Her one surviving brother, Mohammed Hakim, paid tribute to her:

“She marvelled at the universe and had a burning desire to travel and experience as much of the world as possible. Husna was an intellectual and often indulged in creative writing and studying history. She was an amazingly good cook too; she could make any kind of dish or dessert and it would always come out delicious and right the first time. If you ever ate her cooking, you would always ask to eat more.”

He paid tribute to his brothers too. About 27-year-old Hamid
he said:

“His fun-loving personality always shone through, even when
he wasn’t feeling his best … He loved living, he wanted to do so much not just for himself, but for everyone around him.

He was very mature for his age, and wise … How quickly he was taken away. The world has lost a magnificent soul.”

“Hanif was an extremely passionate person when it came to
faith and God, as well as helping others in need. Hanif has always been
extremely creative from a young age. He was brilliantly talented in drawing and design, and adored animation. He would often create his own animations or create beautiful pictures for our whole family.”

The Begum parents, Rabia and Komru, both came from Sylhet in Bangladesh. Rabia was social, friendly, and a good cook. “She was the most
beautiful, generous, caring and loving mother anyone could ever ask for,” her surviving son said. “Most of all, she was my mum.”

Two of Komru’s sons, Mohammed Hakim and a son from his first
marriage, Sujon Miah, spoke about their memories of him. “My father was an amazing father, a dedicated husband and a good Muslim who prayed five times daily, and a family man,” Momammed Hakim said. “He loved watching a lot of nature programmes as well as a lot of action movies – anything with Arnold Schwarzenegger, Sylvester Stallone, Bruce Lee, Jean-Claude Van Damme, Steven Seagal and Jet Li were among his favourites.”

Sujon Miah described him as a man who, “had done plenty for
the local community. He donated hefty amounts to build mosques and orphanages in the area, supported many families within the clan in distress. He was a deeply religious person, I never saw him missing any prayer.”

The whole family were deeply religious, people who knew them said. Due to the manner in which they died and the need for investigation, their funerals were even more difficult than they might have been. After the funeral of Husna and Rabia, cousin Abdul Rahim spoke of his anger.

“We want to know why no fire brigade hoses could reach
beyond the lower floors or why cranes weren’t used to rescue people. Why won’t the authorities admit how many people died? Why didn’t they make the building safe? Why weren’t they there to help us?”

And at the inquiry, Mohammed Hakim spoke of his grief:

“As a result of this fire not only did I lose five members of my immediate family, but I have also been made an orphan.

I can say with my hand on my heart that I’m extremely proud of my family for staying close to each other in their last moments. That my siblings did not leave my parents behind even though they may have had the chance to escape.

My parents had mobility issues. My father had strokes, he should not have been on the 17th floor, we complained about this numerous times.