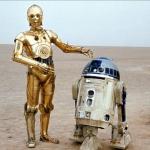 Did you know, that according to George Lucas R2D2 was the one narrating of his sci-fi saga?

The Star Wars universe is filled with thousands of wonderful characters, yet the focus of the entire main series is the Skywalker family; from Anakin Skywalker in the prequels to his grandson Ben Solo in the sequel trilogy, it has always been about them. So why the narrow narrative?

Originally, Star Wars (later subtitled: A New Hope) was supposed to be titled “Journal of the Whills Part 1”. Luke Skywalker’s story was therefore supposed to be a retelling from an unknown narrator, someone who was there through it all.

It turns out the narrator wasn’t someone, but something. In the book “How Star Wars Conquered the Universe” by Chris Taylor, it is revealed who George Lucas thought was telling the story.

Speaking to animation director Rob Coleman, Lucas said of “his ultimate framing device” that: “The entire story of Star Wars is actually being recounted to the keeper of the Journal of the Whills — remember that? — a hundred years after the events of Return of the Jedi by none other than R2-D2.”

Yes, the lovable droid is the one telling the entire story. Unlike C3PO, R2 doesn’t have his mind wiped at the end of Revenge of the Sith (also the reason why Threepio isn’t bothered about seeing Obi-Wan Kenobi when R2 is) so he can remember the Clone Wars.

Lucas also points out that Artoo never makes a mistake in the series and is often responsible for saving the lives of the main characters. Meanwhile, every other character is flawed, and C3PO always comes off as annoying and getting into trouble – a flawed narrator who doesn’t want his friend being in the limelight.

However, this also begs the question: how does R2 know anything about the events of The Force Awakens, he is asleep the entire time? Is it just a dream sequence? Or did JJ Abrams not know Lucas always meant the droid to be the narrator of the story?