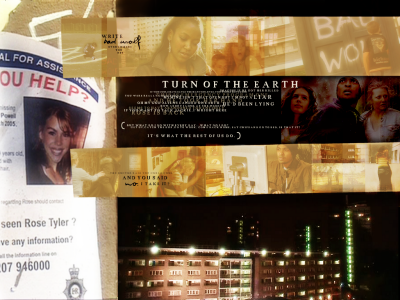 Ten years ago to the day, I started writing a Doctor Who fanfic called Turn of the Earth. I even made a whole lot of graphics/covers/etc for it, as fanfic writers did back then. You can see one up there; sadly it’s easily the best of the bunch.

Turn of the Earth was a gloriously jumbled affair about Mickey Smith and the briefly mentioned (in Boomtown) new girlfriend of his: Trisha Delaney. This fic was running concurrent to the actual series, so as Mickey got drawn further and further into the Doctor’s world, Trisha (who wasn’t even introduced til Part 3) took over as protagonist.

I loved Trisha so much. Russell T Davies, the writer of Boomtown, didn’t really have a lot to say about her. Just a brief description via Rose: “She’s nice. She’s a bit…big.” Mickey’s reaction was “She lost weight!” so I wondered if he actually liked this Trisha, and I decided he did. But what was she like? Why did she lose weight? What did she think of Rose? Did she feel like a rebound? And so on.

I don’t suppose Trisha meant more than a throwaway line to Russell T Davies, a quick plot device to show how far apart Rose and Mickey had grown (there’s even a cut line from The Parting of the Ways where Rose asks “How’s Trisha?” and Mickey says “Don’t care”) but once I started writing her, she meant the world to me. So did the people around her: Shareen Costello (another throwaway name you might remember from the series), her father, her mother, her brothers, her neighbours, and of course Mickey and Jackie. I wanted the Powell Estate and the people there to have lives, because (fairly or unfairly) I never really got the feeling Russell T Davies thought much of it or them.

I don’t know if I did or didn’t manage it, but I did give at least Trisha and Shareen lives, I think. They saw the world end – the Battle of Canary Wharf affected everyone, after all – but they survived. And they built a friendship that I think is actually the heart of the entire story, even though that wasn’t the intention at the beginning.

Stories about the people left behind on Earth while the adventure carries on someplace else are my favourite stories. (That’s probably why I latched onto Mickey so hard to begin with.) What does it mean, to be involved in the story, but have no control over it? Even now, watching the current series of Doctor Who, I wonder about Trisha and what she’s doing while the Cybermen invade, the dead rise, monsters stalk the street and so on. Canonically, Clara Oswald lives on the Powell Estate now. In my head, her and Trisha have met at least once, and liked each other. Shareen, who became a journalist in my story, has interviewed her at least once regarding UNIT. And they all lived happily ever after. No, they really did.

Turn of the Earth is on AO3 now (although obviously if you clicked the other link you’ll have seen that.) I thought it deserved to be there with my other ‘good’ fic. It didn’t even need much editing, to my surprise. Seventeen-year-old me apparently knew what she was doing. The only thing I took out was any reference at all to Trisha’s weight as a negative.