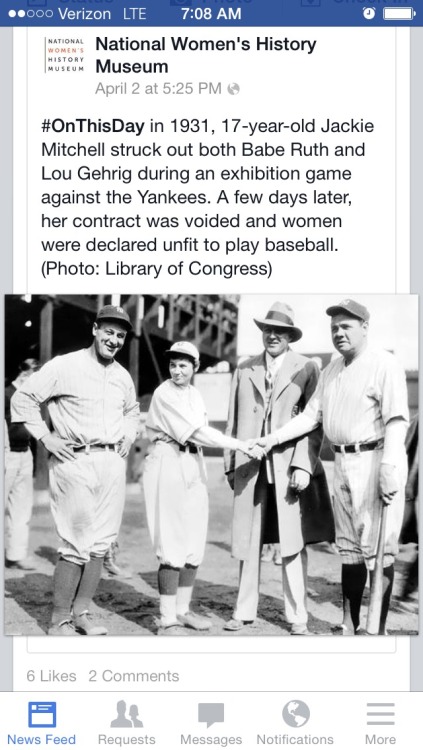 The absence of women in history is man made.

Jackie Mitchell…a bad ass lady I had never heard of.

From her Wikipedia page: “Seventeen-year-old Jackie Mitchell, brought in to pitch in the first inning after the starting pitcher had given up a double and a single, faced Babe Ruth. After taking a ball, Ruth swung and missed at the next two pitches. Mitchell’s fourth pitch to Ruth was a called third strike. Babe Ruth glared and verbally abused the umpire before being led away by his teammates to sit to wait for another batting turn. The crowd roared for Jackie. Babe Ruth was quoted in a Chattanooga newspaper as having said:

“I don’t know what’s going to happen if they begin to let women in baseball. Of course, they will never make good. Why? Because they are too delicate. It would kill them to play ball every day.”

Next up was the Iron Horse Lou Gehrig, who swung through the first three pitches to strike out. Jackie Mitchell became famous for striking out two of the greatest baseball players in history.

A few days after Mitchell struck out Ruth and Gehrig, baseball commissioner Kenesaw Mountain Landis voided her contract and declared women unfit to play baseball as the game was “too strenuous.”[5][10] Mitchell continued to play professionally,barnstorming with the House of David, a men’s team famous for their very long hair and long beards.[11] While travelling with the House of David team, she would sometimes wear a fake beard for publicity.”

These guys were so fucking injured by a teenage girl’s awesomeness that they literally threw a hissyfit and hung up a sign that said “NO GIRLS.”

They couldn’t handle it.